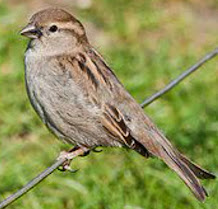 On Wednesday, just before midnight. Angela, a night nurse in a hospice, came to see Phillipa, who had cancer.

After they’d talked a bit, Angela said, “Here, let me tuck you in. Comfortable?”

Late next evening, Thursday, again a little before midnight, Angela came and saw that Philippa was still awake. She pulled a chair beside the bed and sat down to chat.

“What do you think it’s like, on the other side?” asked Philippa.

“I did a lot of wondering about that, too.”

“I read, recently,” said Angela, “about someone called the Venerable Bede, around the year 600. He told the story of a sparrow who flew through an opening into the great hall where everyone was eating, flew around a bit, did this and that, then found another opening, and flew out. Bede said that in the same way we appear on earth for a while. But we are like the sparrow. Of what happens before this life, or of what happens after it, we know nothing.”

“I like the idea of the sparrow,” said Philippa. “Fluttering about.”

“I didn’t know if you were awake,” said the day nurse. “I’m Wendy. Time for breakfast.”

“May I ask you something? Angela, the night nurse. Do you know her?”

“Here’s coffee. Do you want apple juice, or orange, or cranberry?”

“She told me a story that I found strangely comforting.”

“She was a lovely person.”

“She was here, with me, late last evening. Thursday.”

“I probably shouldn’t tell you. Angela had a terminal illness. She kept working right through Wednesday night. She had an adverse reaction to a new painkiller. She passed away on Thursday morning.”