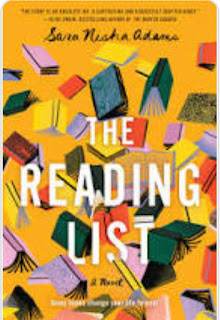 One protagonist is Mukesh, an elderly, grief-stricken man whose wife, Naina, has recently died of cancer. A second is the disgruntled seventeen-year-old Aleisha, who has taken a summer job at the Harrow Road Library. This place is where near where both of them live, a bit beyond the North Circular Road in London, near Wembley Football Stadium.

The book starts with a prologue by Aidan. A few years before Aleisha, his sister, started her summer job, he was happy to escape into this same library and read for a little while. Once, beside him, was a big stack of books that prevented him seeing the person who sat next to him. But he observed the hand of this person writing. When this person left, the piece of paper with writing on it was left behind. Aidan looked at it. Here’s what it said in neat warm letters:

Just in case you need it.

To Kill a Mockingbird

One day, when Aleisha was working in the library, Mukesh arrived and tried to enter. He didn’t notice the button to press that opened the new doors. Aleisha saw him outside but didn’t help. When at last he did get in by following some other visitors, he asked her for a recommendation. She didn’t give one. She was even rather rude.

Then clearing some books away, in a corner of the library where detective stories and crime fiction were shelved—a nice place with windows that overlook a park—she saw one of the regulars whom she thought of as “Crime Fiction Guy.”  He said he wanted to return a book: To Kill a Mockingbird.

When Crime Thriller Guy left, she logged the book back in. On opening it, she found the very same reading list as her brother Aidan had found a while ago, with this book being first on the list.

Feeling upset and guilty for having been horrible to Mukesh she went over to him “her heart pounding in her chest.” A book that everyone should read, she thought. She recommended it to Mukesh and thought of it as her olive branch.

Aidan and Aleisha take turns at staying at home to care for their difficult and occasionally impossible mother, who is only sometimes affectionate. Often she falls asleep in the day-time and, on some of these occasions, when she is at home, Aleisha who doesn’t much like books, reads To Kill a Mockingbird, which she has pinched from the library without checking it out. She becomes engaged in it and, as this happens, some of her troubles begin to fade away. Later, Mukesh arrives at the library and wants to borrow this very same book, the one that she had recommended.

In The Reading List’s Chapter 10, Mukesh and Aleisha in the library, thoughtfully discuss To Kill a Mockingbird, and talk with each other about how it has affected them.

As the chapters continue, Mukesh and Aleisha read and discuss the other books on the list, which was written on scraps of paper that keep turning up at unexpected times in peculiar places. As this novel continues, coming to each of the books, we read of the friendly discussions between Mukesh and Aleisha, and of how what they’d read offered insights and had positive effects on their discontented lives, that encouraged them to move forward.

And a mystery: who was it who wrote the list of books found on scraps of paper here and there?

Coming to the end this review it’s a bit embarrassing to say that The Reading List is one of those books that can bring tears to the eyes.

PS. As a result of reading this novel, I read the second book on the list, Rebecca, by Daphne du Maurier, which I hadn’t read before, and found that, like the others, it’s rather good.