Klara and the future of humanity 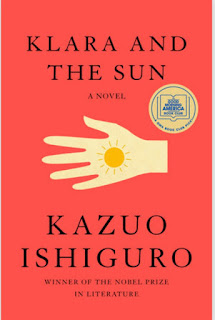 In his latest novel, Klara and the Sun, Kazuo Ishiguro reaches beyond what occurs in most fiction. This novel’s protagonist, Klara, is a robot. Whereas some people have wondered whether robots will, like humans, become selfish and try to take over the Earth, here the question is different. Klara is an AF: Artificial Friend. The question is of what it is to be human, what it is to be a friend, what it is to love someone.

Klara looks like a human being, but she is powered by the rays of Sun, in which—or whom—she has a deeply religious belief. The person to whom Klara becomes a friend, is Josie, a teenager who lives with her Mother. After her morning cup of coffee Mother (capital M) goes off to work each day, leaving Josie with her Artificial Friend. Klara is intelligent, very observant (a pleasure of this novel is reading Klara’s patterns of thought) and comes to love her, to know her as if from the inside. In the first part of the novel, Josie seems to manage alright, but she then becomes more and more sick.

Among the humans who appear as characters in this story, one of the questions is which ones have been “lifted.” We don’t come across that concept until well into the book (page 70 on my Kindle version). We are never told, here, what “lifted” means. My inference is that it means that, when they were children, some of the human characters have been genetically engineered to raise their intelligence. This predisposes some of them to look down on others who have not received this modification. But perhaps their piece of genetic engineering also makes some of them more vulnerable, liable to become sick.

So, alongside the issue of whether robots, made on the basis of artificial intelligence, will accompany human beings on this planet—and with what motives—there comes a newer question. It is that of whether we humans can have our own abilities supplemented by means of receiving genetic changes. A biography and discussion of this issue has also come out this year. By Walter Isaacson, it’s called The Code Breaker: Jennifer Daudna, Gene Editing, and the Future of the Human Race. Daudna, the protagonist of this story, is the principal pioneer of genetic engineering.

A central theme in Klara and the Sun, is whether, perhaps, if Josie dies, a physical model that is being made of her by a man who is a sort of portrait-sculptor, might be inhabited by Klara. The idea is that then, with the very extensive understanding of her that Klara has acquired, the processing parts of the Artificial Friend might be inserted into this physical model so that she might reproduce Josie’s movements, her facial expressions, her thoughts, and her words. In this way perhaps other people might not be able to tell the difference between this artificial Josie and the one who might die. All other people? Including her Mother? Or would something necessarily be left out? And if so what might that be?