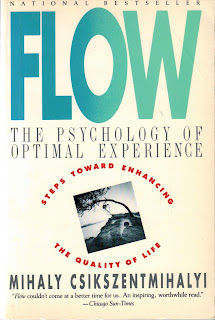 Birte Thissen, with colleagues Winfried Menninghaus (Director of the Department of Language and Literature at the Max Planck Institute for Empirical Aesthetics, in Frankfurt, Germany), and Wolff Schlotz, have recently published an article which brings together Mihaly Csikszentmihali’s concept of flow and the activity of reading fiction.

Flow is full engagement in what one is doing. Csikszentmihalyi illustrated this by depicting Rico Medelin who worked in a factory that made movie projectors. His job was on an assembly line and, as each part-made projector came along, the operation he had to do was supposed to take 43 seconds. He had to do this 600 times a day, and he’d been in this job for five years. Many of us would not have been able to do this for so long, but Rico had analyzed the task, and thought about it; worked out how to use his tools and perform his task better and more quickly so that, in his best average over a day, he had completed each task for each unit in two thirds of the time required. "It is better than anything else," said Rico. "It's better than watching TV” (p. 39-40). Another person who was interviewed was a 62 year old woman who enjoyed tending her cows and orchard. "I find a special satisfaction in caring for the plants," she said. "I like to see them grow each day" (p. 55). A mother said about reading with her young daughter: "She reads to me, and I read to her, and that's a time when I sort of lose touch with the rest of the world. I'm totally absorbed in what I'm doing" (p. 53).

In this state of flow, which Csikszentmihalyi also calls "optimal experience," a person has a sense of purpose and creativity, so that the self and the activity merge. It’s not a matter of waiting for something pleasant to come along, but of setting yourself goals, analyzing and solving problems, creating an activity that is meaningful.

In their study, Thissen, Menninghaus and Schlotz asked whether this idea applied to the reading of fiction. They had 373 people, between 18 and 81 years of age, recruited from an online survey in two large bookstores, read a German translation of Homer’s “Scylla and Charybdis,” Chapter 12 of Odysseus. They found that the experience of flow, as measured by a newly created 27-item scale, was a significant predictor of a feeling of presence in the story world, of identification with the protagonist, of enjoyment of reading, and of comprehension of the story. Here’s how the authors end the abstract of their paper.

Although, to date, the concept of flow has played only a minor role in research on fiction reading, our results suggest that it deserves being integrated into future theoretical frameworks and empirical investigations of positive reading experiences.