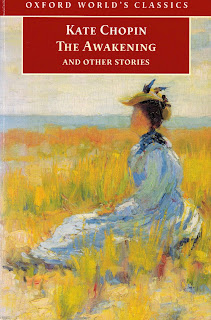 The Awakening, published by Kate Chopin when she was 49 years old, has become a literary classic, and an influential feminist novella.

Here’s a brief summary. Edna Pontillier is on vacation on Grand Isle with her husband Léonce. In the novella’s eighth paragraph she walks up from a beach with Robert LeBrun, after bathing in the warm Caribbean Sea. On the island she also meets Adèle Ratignolle, mother of three small children, the first person with whom she ever talks about her feelings. Although to start with, Edna cannot swim, she learns to do so and feels liberated. She starts to think of rejecting assigned roles. By the end of the vacation, Edna and Léonce have grown apart, while she and Robert have grown close. To avoid what might happen, Robert moves to Mexico. Back in New Orleans, where she lives, Edna relinquishes her role as housewife, and becomes serious about her painting. Léonce takes a long business trip to New York, his mother looks after the couple’s two young children, and Edna moves into a place she calls the pigeon house. She spends a night with a man who’s a substitute for Robert, whom she thinks is still in Mexico. But he returns and visits her. After some awkward meetings, she kisses him. Although she says that he “must have forgotten that she was Léonce Pontillier’s wife,” she and Robert both declare their love for each other. Then a servant brings a message to say that Adèle Ratignolle is sick, so Edna goes to see her. When Edna returns, she finds a note from Robert. It says: “I love you. Good by—because I love you.” She realizes that he has departed, so she will be solitary. She returns to Grand Isle, removes her clothes, and swims out to sea.

As well as this novella, Kate Chopin is known for her short stories. Her principal literary influence was Guy de Maupassant (whom she first read when she was about 35). “I read his stories,” she said, “I marvelled at them.” He spoke to her directly and intimately. She admired his escape from tradition, his rejection of hypocrisy. Her first short story was published when she was 39.

Although there had been myths, fables, and fairy tales, the literary short story dates back perhaps to 1842: Nikolai Gogol’s “The Overcoat.” The short story can be compared with the sonnet: eight lines, four lines, and two lines, with potential turning points between each set, after which we can see what had gone before in a new way. In Kate Chopin’s “The Story of an Hour” (1894) for instance, the protagonist first hears that her husband has died in a railway accident. She breaks down in tears, then goes to her room to be alone. There—turning point—she experiences “something coming to her and she was waiting for it, fearfully. What was it? She did not know; it was too subtle and elusive to name”—a feeling of freedom. Then, towards the end of the story, she leaves her room and goes downstairs. There’s a turning of a key in the front door lock—final turning point—her husband returns; she dies of a heart attack.

In The Awakening, Kate Chopin uses techniques that are typical of poetry. Although she does this all the way through, an instance is in Chapter 10, when Edna finds she can swim, metaphors include: sea—liberation, learning to swim—accomplishment, actions previously not taken—actions that can now be taken, indoors is containment—outside are possibilities, lying in a hammock—comfort, coziness. There are also reiterated scenes of sleeping and waking. In addition, there are juxtapositions and contrasts. In Chapter 10, Edna’s walk down to the beach with Léonce contrasts with her return with Robert. In a more distant comparison, the novella’s first scene with Edna’s return from bathing connects with its last scene in which she swims out to sea. There are also scenes of emotion as inwardly experienced. For instance, as Edna finds herself able to swim “a feeling of exultation overtook her.” Early versions of such feelings tend to be vague. They then become more distinct; so exultation transforms into a feeling of freedom from the role into which Edna has been cast: wife and mother.