The Soul of Kindness 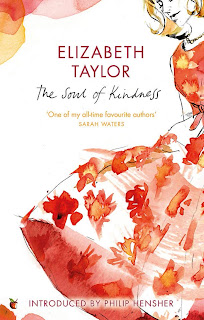 Elizabeth Taylor, born in 1912, was one of the most accomplished English novelists of the Twentieth Century. She can be thought of continuing in the way pioneered by Marcel Proust and Virginia Woolf of depicting people’s inner lives but extending this to include several characters’ thoughts in relating and conversing with a set of other people who include relatives, friends, and lovers. She published twelve novels, a children’s book, and many short stories, which she conceived and thought about while bringing up two children. She was outraged by the fact that most male writers have not needed to divide their time in this way. So here, from her A View of the Harbour (1947) is Beth, a novelist on her way up to London on a train to see her publisher. "A man, she thought suddenly, would consider this a business outing. But, then, a man would not have to cook the meals for the day overnight, nor consign his child to a friend, not leave half-done the ironing, nor forget the grocery order as I have now forgotten it" (p. 186).

Elizabeth Taylor’s The Soul of Kindness (1964) can be regarded as a variation on Jane Austen’s Emma, in which the protagonist encourages others to marry. Elizabeth Taylor's novel starts with the wedding of Flora Secretan to Richard, a businessman. In the early part of the book Flora influences her best friend Meg to yearn for a sexual relationship with Patrick, a novelist, without seeming to know that, although he is willing to take Meg out for an occasional meal, it won’t go much further because he is gay. She also influences Richard’s father to marry his mistress, Ba; they do so and both find their lives much more boring than they had previously been. Meg’s brother, Kit, adores Flora and thinks of her as a goddess. He has been to drama school and has had one or two tiny walk-on parts. Although no one else thinks he has the slightest chance, Flora encourages him to believe that he will triumph and become a great actor. In Chapter 2, (p. 14 in the Kindle version) we read this: “she had inconvenient plans for other people’s pleasure, and ideas differing from her own she was not able to tolerate.” Then here, at the end of Chapter 2, are Flora and her new husband, Richard, in bed.

She was glad that there was a way of coaxing him out of his black humour. She turned him to face her, her silky arms around his shoulders. An end to the sulks. Benignly, she made a present of herself.

Flora … the soul of kindness.

Flora’s friend, Meg, works in an office in the middle of London but cannot afford to live in Kensington. So, with a small amount of money inherited from her father and some encouragement from Patrick, she moves into a little house that allows an occasional distant glimpse of the funnel of a ship passing on the river in an area that seems to be somewhere between Greenwich and Woolwich. Near this house lives Liz whose studio is upstairs from a deserted shop that is scheduled for demolition. Liz lives in the most awful mess: dead flowers, cow parsley, some feathers, dinner plates, sea-shells, all over the floor. But she paints pictures:

The rubbish on the floor and about the room had been re-created, reassembled over and over again, into delicate and intricate patterns … there were also some pale girl children, with staring eyes (p. 39).

The artistic arrangements are beautiful. It doesn’t seem to be an accident that the painter is called “Liz,” because here is a quote from the end of the Wikipedia article on Elizabeth:

I don’t think The Soul of Kindness is quite perfect, but it seems to me that aspects of it are. It does have a plot, but that’s not really what it’s about. It is a book that one needs to read slowly; it’s unlikely to work if you skip or speed-read. It depicts characters’ thoughts, then thoughts of what they might or might not say, maybe could say or should say … but instead they say something else which is sometimes a cliché, which isn’t quite what they meant to say but, because it’s been heard before, could possibly be alright. People’s beliefs and ideas about each other and about themselves also get passed around. At this book’s centre is the issue that although we human beings are completely dependent on our relationships, we often don’t quite know, and some of us seem unable to know, what effects we might have by saying certain things to others.

In this novel, too, are observations: as characters look at gardens and shops and houses. What they see, mingled with their thoughts of what they might say, is a multitude of English peculiarities. The result for the reader (at least this one) was quite a bit of giggling out-loud as I proceeded. In this book as well—rather touchingly depicted—there’s loneliness, particularly for Flora’s mother and for Flora’s friend, Meg.

The book’s principal focus is on self-absorption. Although, in Elizabeth Taylor’s Mrs Palfrey at the Claremont (1971), there’s affection, there’s not much of it in The Soul of Kindness. Instead there’s reflection … prompted by the question of what we human beings are up to in our lives, and on how we search for meaning within ourselves and with each other.