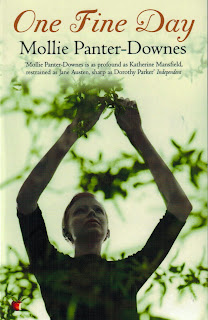 Mollie Panter-Downes became well known for her column in the New Yorker on life in London during World War II (republished as London War Notes). Her fifth novel, One Fine Day, came out in 1947. Its title might have been One Day, because that’s what it is: a day in the life of a family who live in an aging house, somewhere south-west of London, one year after the end of the War.

Here's the plot. Eight o’clock in the morning, the sun is shining. Laura and Stephen Marshall at breakfast. Stephen leaves the house, drives to the station to go up on the train to London, where he works. Their twelve-year old daughter Victoria goes to school. Laura, age 38, the main protagonist, goes on a bus to do some shopping in a nearby town. Provisions in short supply, coupons needed. She returns; does some stuff around the house, and in the garden, then in the afternoon rides on her bicycle to collect the family dog who has wandered off. Having collected him from where he sometimes goes, to a gypsy who lives with several dogs in an abandoned railway carriage, she climbs a small hill, and looks out over the countryside. She lies on the grass, falls asleep, with the dog on a lead beside her. It’s early evening when Victoria returns, having had tea with her friend Mouse Watson. Her mother isn’t home. Later, Stephen comes back from work. Laura still not home. Victoria finds some fish and cooks it. She and her father eat it for dinner. Both of them worried. Where can she be? Laura is woken by a noise. It’s a hiker whom she’d seen on the bus that morning. She sees how late it is; thinks of something she was going to tell her husband but can’t remember what. Thinks she’d better hurry home. That’s it.

The middle of the novel is taken up with episodes, Laura’s meetings with people such as a working class family one of whom, George, is extraordinarily handsome, and might be able to do a bit of gardening but can’t because he’s going off elsewhere, and the Vicar, “a saint who had the misfortune to sound like a bore.” Incidents occur. And memories: Laura remembers a man she might have married but feels relieved that she did not. She sees huts that Canadian soldiers had lived in, sees holes in a wall where army trucks had bashed through. She has thoughts about this house and that one. It’s hard to imagine anything more redolent—I think that’s the word—of South-of-England upper-middle-class life in the aftermath of World War II. One could re-arrange some of the episodes and meetings without making much difference, because the sequence—morning, afternoon, evening—is not what this novel is about. At a deeper level it’s reflection: by Mollie, by Laura (with smaller pieces by Victoria and Stephen), and by us readers, on what it is to be human, on what our relationships within ourselves and with each other are all about.

For me the novel succeeded in prompting reflection, but with some parts that didn’t quite work. And it is so very, very, English. But the inwardness did work, somewhat like Virginia Woolf, but warmer, more interpersonal.

In his obituary of Mollie Panter-Downes, in the third of February 1997 issue of The Independent, Anthony Bailey reported her as saying, "I'm a reporter. I can't invent." What she was doing however was something that poets of the Tang Era in China did. Not invention, but perception of episodes in the world that are reflected in inner consciousness and writing (see OnFiction: “Patterns in the World and in the Mind,’ 9 January 2012; you can reach it by doing a search for “Tang” on the OnFiction home page). In Mollie Panter-Downes’s case, although some of her world is to do with nature, predominately it’s people.