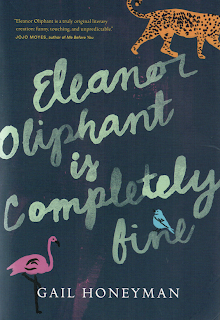 Gail Honeyman said that the idea for her first novel, Eleanor Oliphant is Completely Fine, came from two sources. One was reading an article about a woman in her twenties who lived alone in a big city. She would leave work on Friday and would often not speak to anyone until she returned to work on Monday. The other was how someone might manage if they were conversationally awkward. Eleanor Oliphant’s work and home life are similar to those of the woman in her twenties. And she is not just conversationally awkward but often inappropriate, sometimes rude.

Eleanor was hired by Bob to work in the accounts office of a graphic design company in Glasgow. She has been there for nine years. She is clever and did a degree in classics. She gets the Daily Telegraph, not because she likes the newspaper but to do its cryptic crossword. She thinks she isn’t liked by the others who work in her office, which is probably right, because she can’t do small talk. At weekends she drinks vodka, so that Saturday and Sunday pass in a bit of a haze.

On television one evening, she sees Johnnie, a musician. Immediately, she falls in love with him, because she can see from the three-piece suit that he wears and the way that he leaves undone the bottom button of his waistcoat, that he is a gentleman. He’s the one for her. He’s a musician and she knows that the moment they meet he will fall in love with her. She starts to make preparations to make herself look more beautiful.

Every Wednesday evening, Mummy gets in touch. In Chapter 4, Eleanor thinks that it was hardly surprising that her mother had been institutionalized, given the nature of her crime. During these conversations, Mummy is scathing and horrible but Eleanor tells her about this chap she is thinking of, and Mummy is encouraging.

In her office, Eleanor’s computer malfunctions. She gets in touch with Raymond, a new bloke who has come to work in IT. He fixes the computer. Eleanor observes that he has scruffy hair, and a bit of a paunch. He wears running shoes, and silly t-shirts. He shaves infrequently and looks unkempt. Not only that but he smokes cigarettes.

“How disgusting,” says Eleanor. “The chemical constitution of cigarettes includes cyanide and ammonia. Do you really want to willingly ingest such toxic substances?”

Eleanor receives a visit from a social worker. This occurs every six months. She was in foster care from the age of ten. She lived with several families and didn’t get along with any of them. Because of her background she has been housed in a low-rent flat. This time the social worker is new; during her visit, as she flicks through her file on Eleanor, a look of shock comes over her.

One day, although they have only just met, Eleanor and Raymond find themselves leaving work at the same time. As they walk along, they see an elderly man staggering, then falling down in the street. Raymond goes to help him and gets Eleanor to do so as well. Although reluctant, she does. They call an ambulance, and the man is taken to hospital. They find themselves making visits to the old man in hospital. His name is Sammy. He tells them they saved his life. Just before they leave, one day, he takes Eleanor’s hands in his. This feels to her very warm and cozy.

Although love is the most popular topic in stories from all round the world—love of the sexual kind—this story is not about that. It’s not a love story, it’s a friend story.

In Chapter 10, Raymond has invited Eleanor to go with him to visit his Mum, which he does nearly every Sunday. It involves Raymond going around his Mum’s house and doing everything that needs doing. She has terrible arthritis, but she keeps everything clean and neat, and is able to look after the vegetable garden in the backyard. Eleanor is asked to stay for tea, which she does. It’s soup with stock and vegetables from the garden. Lovely. Afterwards Raymond says he’ll do the washing up. Noticing Eleanor’s hands have eczema, he says that he would wash and she could dry. At one point, conversation among Raymond, his Mum, and Eleanor, turns towards Raymond’s dad, and how he lived long enough to see his daughter get married. Eleanor wonders why Raymond had not mentioned that he has a sister.  His Mum asks her if she has any brothers or sisters. She says she hasn’t. She says that this is a source of sadness for her, and bursts into tears. Apologies all round. She says she never knew her father, and that she talks to her Mummy once a week. It all seems perfectly ordinary … it IS perfectly ordinary, except this is the first time that Eleanor has ever talked about herself to anybody.

The novel also has an aspect of mystery. We wonder what happened to Eleanor, what had shocked the social worker, what the Wednesday evening conversations with Mummy are really about. We ask ourselves why Eleanor burst into tears when asked about a sibling.

Towards the end of the novel, Raymond says this: “I remember when I first met you … I thought you were a right nutter.”

Then Raymond says: “Aye, sure you’re a bit bonkers—but in a nice way.”

And maybe that’s a bit like some of the rest of us.