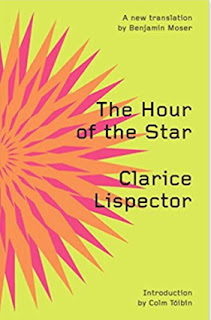 The novella, The Hour of the Star, by Clarice Lispector, is unlike anything else I have read. This review can be thought of as following on from my previous post about authors hearing the voices of their characters, and characters having independent agency. It’s about the lives of someone called Rodrigo, an author-narrator who starts by thinking of writing a book (the one you would have in your hands as you read The Hour of the Star) and the book’s protagonist, Macabéa, a nineteen-year-old woman, who is thin and not good-looking, who grew up a very poor area in the north-east of Brazil, who had only three years at school, then moved to Rio de Janeiro to be employed as a typist.

Clarise Lispector was born in 1920, in the Ukraine, and her family moved to this same area in the north-east of Brazil, before moving to Rio de Janeiro.

In the story Macabéa meets the arrogant Olímpico, with whom she falls in love. On page 38, the author-narrator says of him: “He had, I just discovered, inside of him, the hard seed of evil.” Later we read that he had killed someone in the north-east of Brazil, and that he was also a thief. A few pages later we read that when walking along with Macabéa, Olímpico says he is strong, so he lifts her into the air. She is euphoric: “what it’s like to fly in an aeroplane” she thinks. Then he dumps her in the mud. Then, another few pages on, Olímpico says to her: “are you just pretending to be an idiot or are you actually an idiot?” Macobéa: “I’m not sure what I am, I think I’m a little … what? … “I mean I’m not quite sure what I am.”

Then Olímpico goes off with Glória, a blond chubby girl who works in the same office as Macabéa. Feeling guilty, Glória recommends that Macabéa should visit a fortune teller, Madame Carlota, who sees in Macabéa’s cards that her life has been and continues to be horrible. Then she relents and tells her client that her life will be wonderful, that she will be courted and marry someone called Hans. Macabéa is enchanted. As she leaves the fortune teller’s place, and steps off the pavement, she is run over and killed by a large and expensive Mercedes.

As Colm Tóibín wrote in a very engaging review:
In October 1977, shortly before her death, she [Lispector] published the novella The Hour of the Star in which all her talents and eccentricities merged and folded in a densely self-conscious narrative dealing with the difficulty and odd pleasures of storytelling and then proceeding, when it could, to tell the story of Macabéa, a woman who, Lispector told an interviewer, "was so poor that all she ate were hot dogs". But she made clear that this was "not the story, though. The story is about a crushed innocence, about an anonymous misery." [Then], Lispector told a TV interviewer: "I went to a fortune-teller who told me about all kinds of good things that were about to happen to me, and on the way home in the taxi I thought it'd be really funny if a taxi hit me and ran me over and I died after hearing all those good things.”

But this novella isn’t about the plot. It’s about how Lispector the writer, created Rodrigo, the author-narrator, who created Macabéa as a character, and how this character in turn seems to take part in the process of creating not just author-narrator Rodrigo but also, perhaps, in a certain kind of way, Lispector.

If we knew that that someone had decided to enter the police, or to be shop assistant or office worker, we might think that she or he had taken a decision, to become a person of a certain kind and that, in turn, the role she or he has taken on would shape something in that person. But an original idea of this novella, is that a somewhat similar process can occur with a writer and the story and characters that the writer decides to create. As we read on page 13 the author-narrator says:
I have a fidgety character on my hands who escapes me at every turn expecting me to retrieve her … I see that north-eastern girl looking in the mirror and—a ruffle of the drum—in the mirror appears my weary and unshaven face. We’re that interchangeable.

Then on page 61 the author-narrator says to his readers:
As for me I’m tired. Maybe of the company of Macabéa, Glória, Olímpico… I have to interrupt this story for about three days … For the last three days, alone, without characters, I depersonalize myself … as if taking off my clothes … and now I emerge and miss Macabéa. Let’s continue.

But this novella is not just about this fascinating conversation among the writer, the author-narrator, the characters, and ourselves as readers. It’s a meditation on the nature of human life. It’s about how much we understand about others or understand about ourselves.

Colm Tóibín (2014) Clarice Lispector's The Hour of the Star is as bewildering as it is brilliant. The Guardian, 18 January.