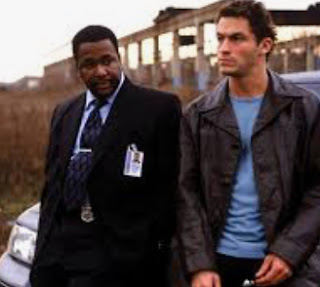 In OnFiction’s series of television series, we ought perhaps to have started with the series that really started it all: “The Wire.” It was conceived by David Simon, began in 2002, and ran for five seasons. Simon had worked for several years as a journalist on the newspaper, The Baltimore Sun, researching and writing about Baltimore’s police. Although he pitched “The Wire” to Home Box Office (HBO) as a cop show, as Margaret Talbot explains in her New Yorker article, “Stealing Life,” Simon said he thought about it as like a novel, in which each episode would be a chapter. A season would involve the development of character, an overall plot, perhaps with some digressions.

One focus of “The Wire,” set in Baltimore, is on organizations in which not only do misunderstandings occur, but mistakes are made. Here the police are mirrored by a local drug gang. In both, higher-ups administer and sometimes take advantage of their positions. But, in these organizations, comradeship occurs. In this way, as police detectives, there are Bunk and his friend McNulty (seen in this image). Then one step up, Lieutenant Cedric Daniels, who gains a growing respect. Then further steps up, people with more power and less respect. In the drug gang’s organization, there’s a comparable hierarchy. The first season’s plot is the contest between these two organizations.

Near the beginning of the first episode of the first season we are in a courtroom, where a man at the gang’s mid-level, D’Angelo, is accused of having shot and killed someone (an underling drug-dealer in the gang). A witness changes testimony and D’Angelo is acquitted. Because getting him off had cost the gang time and money, he is demoted. The person who administers this is Stringer Bell, the gang’s organization person. Above him is the leader, Avon Barksdale (a companion of sorts to Bell). Both of them are very careful to avoid being seen or known by anyone in the police. (Although the gang’s business is of selling drugs, neither of these two, of course, ever indulges.)

The title of the series refers to the police’s wire-tapping into telephone conversations among members of the drug-dealing gang. As Margaret Talbot points out, there’s also the implication that, as we watch, we are also tapping into the lives of these two groups of people. One effect, for viewers, is a growing understanding and empathy for some of the principal characters in both the police and the gang.

Most of the people on the show are black. This is another focus, with the issue of how problematic it can be to live in working-class American cities: one of the preoccupations of the principal author, David Simon.

Several groups of immigrants—Irish, Italian, Jewish—included people who, finding life in the New World at first very difficult, took part in illegal activities. They aspired to make enough money so that their children could go to college and lead middle-class lives. Because of institutionalized prejudice, this kind of issue has been far more problematic for black people, whose ancestors did not immigrate: they were transported. (How’s that for illegality?) In this show, in Episode 8, of the first season, entitled “The Lesson,” we see Stringer Bell taking a class in economics.

“The Wire” enabled television series-watching to be taken seriously, in the way that reading novels and watching certain kinds of films have become. And, as I wrote in OnFiction’s first review of television series (24 March 2020): “As Jessica Black and Jennifer Barnes (2015) have shown … a prize-winning television series can have the same kinds of effects as reading fiction in enabling people to increase their empathy and understanding of others.”

Jessica Black & Jennifer Barnes (2015). Fiction and social cognition: The effect of viewing award-winning television dramas on theory of mind. Psychology of Aesthetics, Creativity, and the Arts, 9, 423-429.