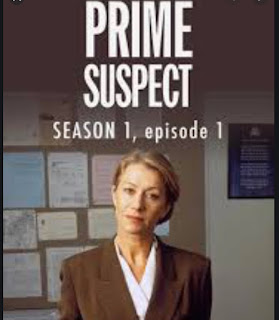 To follow up from posts on 24 March and 1 April, here’s another one about a television series: Prime Suspect. Its protagonist, Jane Tennison, is one of the first women to reach the rank of Detective Chief Inspector (DCI) in the London Metropolitan Police.

A frequent idea of detective stories, especially police procedurals, is to follow a trail of clues, eventually to discover whodunnit, and have them put away, or as a judge might say, “sent down.” More deeply, however, as happens here, this kind of story is really about character and relationship.

In character Jane Tennison, has intelligence, thoughtfulness, determination ... These have contributed to her ability to have risen in the hierarchy of the police. For eighteen months, since she achieved her present rank, she has been going into the police station each work-day, mainly to attend to paperwork, and waiting, waiting.

The first episode of Season One of Prime Suspect starts with a bunch of police cars arriving, summoned to a flat, to see the dead body of a woman, thought to be Della Mornay. A pathologist attends, and amongst his findings is a spot of blood believed to be that of the perp (perpetrator). At the time of this series, before the days of DNA analyses, there were, however, blood groups. This spot of blood is of a very rare type. A man with this blood group is found on the police computer system, so Detective Chief Inspector John Shefford, an amiable man with a round face, goes with his men to visit him: the suspect, who immediately becomes prime, and is arrested. At the station Shefford questions this man who admits to having picked up Della, in order to have sex with her. In Shefford’s team, everyone’s pleased with themselves for having solved the case so quickly. Then as DCI Shefford begins to give his report on the case to his superior, Detective Chief Superintendent (DCS) Hernan, he suffers a terrible pain in his left arm, is taken off in an ambulance, and dies of a heart attack.

Jane Tennison asks DCS Kernan if she can take over the case and head up the enquiry. He says he’ll think about it. She tells him she’s been waiting a long time for an opportunity of this kind but has always been sidelined. Kernan goes another step up the hierarchy, to talk to his boss, Commander Traynor, who tells him he’s had a word with Tennison’s previous chief, in the Flying Squad. Traynor then tells Kernan that the Flying Squad chief reckons Tennison needs a break. Because of where this series was made (England), there need to be jokes; otherwise one cannot have any kind of proper relationship with anybody. So here’s the next bit.

So Tennison is appointed to head up the investigation into the murder of Della Mornay, much to the annoyance of almost everyone in the murder team. Then comes a video shot of about a dozen police in the incident room, all of them blokes. One of them, Detective Sergeant Ottly, starts plotting against Tennison, to try and sabotage her, because she’s a woman. Then as Tennison gets quickly onto the case, she turns up new evidence that the team had previously missed. Then, to members of the male-team’s chagrin, she orders the suspect to be released.

So not just character, relationships: Tennison’s with her boss, her boss with the boss above him. Tennison with all the members of the murder squad, Ottly’s with Tennison. Tennison’s with her live-in boyfriend (under the stress of her new and often perplexing work-life).

Another thing, not always mentioned in discussions of detective stories, is the nature of the enquiries into what this person and that person (suspects, witnesses) were doing at this time and that time. People are interviewed in ways that rely on certain kinds of relationship—sometimes sympathetic, sometimes threatening—between detective and interviewee, which offer further insights, which we may not always be able to obtain in everyday conversation, into the character of different kinds of people who live in our societies.

Is it enough that there are jokes? Or must they also be "naughty" jokes? (And do you mean to suggest a difference between the USA and the UK?)