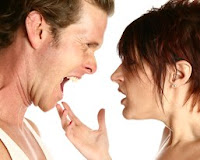 In a recent study, Eli Finkel and his colleagues (2013) have found that writing to re-appraise conflicts with spouses, improves the quality of marital relationships. Participants in the study were 120 married couples who lived in the Chicago area, who answered an advertisement. At the beginning of the study they completed an internet survey and also came for a laboratory visit for a study that was different from the current one. At that time, and at four-month intervals for two years, they completed an internet questionnaire that contained six single-item scales: of relationship satisfaction, love, intimacy, trust, passion, and commitment. For instance the relationship satisfaction question was "I feel satisfied with our relationship." It was scored 1 "strongly agree" to 7 "strongly disagree." The combined scores on these six scales gave an index of subjective marital quality. At month four, and then every four months (with all data being collected entirely by internet), both members of all the couples were asked to write a “'fact-based summary of the most significant disagreement' they had experienced with their spouse over the preceding four months, 'focusing on behavior, not on thoughts or feelings.'”

At 12 months, half the couples were randomly assigned to a condition in which, after they had written the fact-based summary of their disagreement, they were to write for seven minutes to reappraise this summary by thinking about it as if it were seen by a third party, from a neutral point of view. Every time they started this seven-minute reappraisal they were given three prompts. In the first prompt they were asked to think of this neutral third party as someone who wanted the best for all involved, and who tried to think what good might come from the disagreement. In the second prompt, they were told that some people find it helpful to take this third-person point of view during disagreements with the partner, and to think what obstacles they faced in taking this point of view during a disagreement. In the third prompt, they were told that although there are obstacles to taking this third-person point of view, they should nonetheless try to take it during disagreements, to think how they could succeed in doing this, and to think how taking it might make the best of disagreements.

Over the first part of the study (0 to 12 months) there was a steady downward trend in the average of the six-item measure of marital quality for all the couples. This is a normal finding, since marital quality tends generally to decline from the time of marriage until children leave home. At 16, 20, and 24 months, the downward trend of marital quality stopped for the couples who had the writing assignment to reappraise a conflict by thinking about it from the point of view of a third party, and the encouragement to use this point of view during disagreements. This cessation of the graph's downward slope was significantly different from the graph of the control couples who had not been asked to do the reappraisal assignment and had not been given prompts. Their graph continued downwards, with no change of direction, until the end of the study at 24 months.

This fascinating study recalls the benefits to the functioning of the body’s immune system of writing about a significant emotional episode by Pennebaker (e.g. Pennebaker & Chung, 2011) Perhaps marriage is part of a social immune system, so that writing thoughtfully about it can improve its function.