Moral certainty, relational ambiguity, and the food between 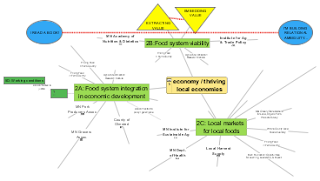 My first food dialogue map isn't very pretty, despite starting with the premise, "I read a book." I also realize it's not as legible as I might like, so let me tell you a little bit about what you're seeing before I explore my chagrin at realizing, after a lifetime spent trying to get people to read books, that I suddenly want them to stop.

The base diagram here is the core of our attempt to lay out a diversity of different approaches to key themes of the local and regional food economy discourse here in Minnesota (follow the image link for the filled-in clickable version). Rather than delve into the specifics, however (I'll undoubtedly fill you in on the details as this year-long series continues), I'd like to trace out two tensions that have emerged strongly as I've worked through this idea of a "food economy" -- tensions I've overlain on the top of this diagram in yellow and blue in my attempt to start exploring the axes they delineate: embedding vs. extracting value, and declaring moral certainty vs. building what I'm calling relational ambiguity.

Now especially with such detailed interest in food economy and culture, I obviously don't want people to stop reading books entirely -- for one thing, this would be a hard moment to even try in the blossoming world of food and agriculture writing. But when I encountered someone yesterday saying "I've read this book that you must read," after proffering several dubious statistics about the state of food affairs, my heart sank in what I immediately recognized to be a response to an increasingly characteristic pattern in my public encounters with people interested in food. I was unable to make headway against the convincing book in the entire remainder of our conversation (about my agreement with the general diagnosis, but my interest in enlisting allies, say, in farmers -- who also don't want to see corporate takeovers of food policy making seed lairds rich -- rather than pissing them off with suspect allegations about their judgment and practices!). It was not that my argument's substance was different, but it was asking someone to step away from a clear and polarized position to a more ambiguous and relational one, and I recognize that this comes with costs (even while I may not yet have adequately practiced my arguments for why they're worthwhile costs to take on).

As I thought about what might change my colleague's mind, I could not help reflecting on the central theme of many of the books and films that I have recently read about food economy -- most notably the film Bitter Seeds, which played here last week, and the book The Hungry World (in addition to the articles that went into the development of Bet the Farm). All of these stories trace the development of logics of extraction in food systems -- Bitter Seeds perhaps most accessibly, as it traces the transformation, in a generation, of a peasant economy into a brutal tangle, from which value is extracted (via the construction of needs for credit by the replacement of seed saving with commercialized seeds and associated input costs) at the same time that people desperately try to figure out how to even survive in such a system. This is such a perfect example of the problems my colleague is fighting -- but it is also an example of the complicated ways people become entangled in food discourses: farmers may be trapped on a cost-price treadmill, but (given the efforts already made, and the resounding beating they have taken by industry counter-attacks, most notably the over $50 million put into defeating the wildly popular California proposition to label GMO foods) publicizing written facts about agri-food problems seems much less likely to change them than organizing alternatives and transition strategies.

I recognize that this may seem naive, especially in the face of the political economy just mentioned -- however, I think that there is utility in engaging the other tension mentioned, between extraction of value (for example, via financializing each aspect of the food economy, so that every step involved in bringing food from field to fork involves someone else's profit) versus building of value (so that the parts of food systems we value are supported via collaborative institutionalization, not just left to implicitly fill in the borders around parts people don't like). A central feature of the axis between embedding and extracting value appears to have to do with the scales of time and space considered, as well as the cultures of time and space. Perhaps paradoxically, the longer-term and larger-scale approach we book-readers have been trained to privilege as "more systemic" may also bias us toward types of abstract accounting that discount important values -- values that may not be fungible, or extractable, and yet may still be significantly impacted by the pressures of organizing systems around values that CAN be extracted. I close with uncertainty over whether there is an association between these two tensions or not. I'm not convinced that unwavering moral certainty supports the continuance of extractive regimes. But I do think that the practices involved in engaging others and accepting the ambiguity necessary in negotiating plural values (not with moral relativism, but negotiating accountability to the values of those involved) may be the same governance practices needed to keep values embedded in a system, suggesting yet more reasons we might want to understand the stories of others, and how they relate to ours.