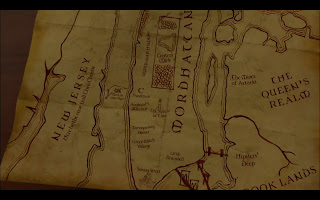 As many readers have noticed, my interest in the psychology of narrative has been engaged in some long-term public work on the way that people talk about food, and about the ways that this talk about food organizes ways that social interactions around food and feeding are conducted -- for example, in a series of seminars on the implications of the way that people talk about "feeding the world", or in a series of interactive food system games I've constructed and conducted as a platform for challenging dialogue at venues such as the Frozen River Film Festival or the Minnesota State Fair. There have been a couple of features of this work that I have particularly enjoyed, and that I'd like to mull over in the context of the OnFiction community.

First, and perhaps most successfully, as part of the method I have used to help construct these opportunities for narrating food experience in new ways, I have deputized "discursive referees" -- people who are given a public mandate to stop the conversation at hand if, for example, it falls into well-trod ruts that it might be more interesting to step around, or, even better, to examine as themselves objects of inquiry. Discourse referees have been one of my favorite parts of treating narratives as exploratory games -- many referees have been wonderful: sparing, generous, and yet stepping in gently just at the moment a conversation starts to derail and providing enough reference to help rewind to the point of derailment and to help construct possible ways around the stumbling point. This approach has been lucky, I realize, but I'd like to continue to try it out and to consider some of the ways that some of what works so well about it is the way it marries some of the best parts of our experience of written and spoken language.
A second aspect of "talking food" that I have found so compelling is the way this careful attention to narrative experience (such as with the development of discussion contexts welcoming to refereeing) has led me to mapping discursive and epistemological terrains. I am, after all, a geographer, and studying various representations of food system conflicts has brought me repeatedly to thinking about what it might be like to map the geography of knowledge terrains.

I am, of course, particularly interested in spaces of ambivalence, where people might wander around lost and buffeted by winds of contradictory motive -- but I am also fascinated by different positions kept incommensurate by growing mountains of misunderstanding or widening chasms of disdain, fear, or defensiveness. As a geographer, I have been hung up on how to subvert geo-coding data to represent epistemological space. And I have already started importing geographic concepts that help organize the narrative space: territorial metaphors such as “realist geopolitics” (contained / sovereign / given) versus “critical geopolitics” (intertwined / constructed) give me ways to consider and treat the boundary conflicts between different knowledge cultures!

Despite having spent the greater part of an artists' residency this summer thinking about how to model food system discourses in a game narrated in State Fair Vernacular, however (as well as the transformative transition from a landscape artist into a geographer during a long stint of sculpting cartographic symbolizations), it wasn't until I was repeatedly zoomed across Stephen Colbert's Tolkienesque map of New York (above) during his immensely nerdy Hobbit week that I considered less technologically geo-referenced cartographic techniques for thinking about the shapes of politically contentious food narratives. I could draw them out.

And so, over the next year, I will provide monthly installments in a series of "narrative maps" sketching out patterns in the ways people represent their experience the food system.

In addition to depicting these representations, I hope to use my maps to reflect, exhibit, and interpret people’s engagement with the patterns I play with -- to see how well they capture the way people imagine themselves to be connected with the eco-social processes and cultural knowledge that constitute the food system, and various people’s hopes for sustainable and transformative food systems. My ambition for this modest series of maps is that it will provide the armature on which I might build a gradual public process for assembling tools existing oral history projects and community food assessments (and other publicly generated food system knowledge tools) and transforming them into a navigable public learning domain -- both online, and in the series of games and tours I will continue to develop.