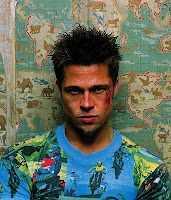 When watching a fiction film we can become deeply immersed in the world of the narrative. In research circles, this is referred to as transportation, to communicate the idea that we have become transported into the narrative. However, we may also become particularly engaged with a single character, reacting to events in the narrative as if were in that character’s shoes. This is known as identification among researchers. Marc Sestir and Melanie Green (2010) wondered whether identification and transportation were related to whether movie watchers came to see themselves as more like a particular character or not. That is, when watching a movie we often like a certain character, but do we become more like that character in some ways as well? They hypothesized that identification would be more likely to generate this phenomenon than transportation, since only identification refers to engagement with a particular character. Transportation is seen as a more general phenomenon, related to engagement or immersion in the entire story world. In their study, participants were experimentally manipulated to have either high or low identification, and high or low transportation, based on different instructions (e.g., watch this “as if you were the main character in the clip”). They then watched video clips and after rated whether certain traits related to themselves. What the researchers found was largely in concordance with their hypotheses. Traits related to both the character and the participant were found to be more mentally accessible among those put into the high identification condition compared to the low identification condition. There was also some evidence that traits not previously associated with the self, but present in a character identified with, later were seen as part of the self. This study is an exciting demonstration that fiction can influence our self-perceptions, implying that our identification with characters can change the way we see ourselves.

* As always, I am happy to send this article to those interested in reading it. My e-mail is available in my profile. In what is becoming a familiar refrain, I apologize for the lateness of this post.

Photo: Tyler Durden from Fight Club, one of the films used in this study.

Posted by Raymond A. Mar at 18:44
Labels: Effects of fiction, Film, Research Bulletins

Thanks for sharing our study, Raymond!

My pleasure Melanie! You always do such interesting work. It's great to see some of these questions answered.