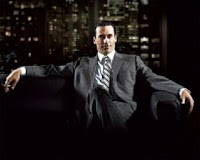 In a recent New York Review of Books (Vol. LVIII, No.3), Daniel Mendelsohn gives Mad Men a run for their money.
The [show’s] writing is extremely weak, the plotting haphazard and often preposterous, the character-izations shallow and sometimes incoherent; its attitude toward the past is glib and its self-positioning in the present is unattractively smug; the acting is, almost without exception, bland and sometimes amateurish (p. 4).
Mendelsohn then attempts to examine what it is about this show that, despite its poor quality, propels such outrageous popularity and enormous thirst for more. His answer is thoughtful - the craze is driven by offspring of Mad Men generation in their tender, yet misplaced, attempt to better understand their still obscure parents (even if that means watching a bad TV series).
Unfortunately for Mendelsohn, many of his readers disagree vehemently, and their responses are, according to him (Vol. LVIII, No.5., p. 41) marked by “the hysterical tone, intellectual sputter, and ad hominem vituperation.” It made me wish I could peek into his e-mail inbox to see what it contained (reconstructive psychoanalysis?). In any case, this was certainly not a response of tender introspective children, letting others nostalgically, and badly, reconstruct their parents’ generation.
A clue to Mad Men popularity is something that comes up in every discussion of the show, yet the very thing that Mendelsohn glosses over in his article – style. Of course, style is easy to dismiss when it evokes fads in hair-cuts or vests. But when one creates an outer arrangement that symbolically represents an inner truth, then we call it an art. The creators of Mad Men managed to capture, stylistically, something that we yearn for in modern life; something as simple and as necessary as embodiment. The protagonist’s face, tie, shoes, telephone, desk, glass and the ice in the glass, even his wife, mistress, and secretary (some of whom overlap), all have stylistic weight and precision that viewers can read existentially.
In the modern era of plastic desks, paper cups, and electronic everything, the Mad Men style is solid, grounded, hefty. It fulfills the same function as silence does in some French movies – removes the frills and offers presence, which viewers see as essence. The obsession with style, then, is not incidental, but central, to the show’s popularity. Actually, you can even try watching it on ‘mute’. You won’t miss much, yet oddly, you may still like it.
Of course, this is just my guess for Mad Men madness. I hope I have better luck than Mendelsohn.

Thanks for your posting on Mad Men. I'm at a loss to understand why Daniel Mendelsohn panned this show so completely. Am I a philistine? I think the acting so good that I am often left speechless by it at the end of an episode; the characters are complex and challenging; the issues remind me of how much we've achieved since the racist/sexist/anti-Semitic times depicted. Funnily enough, I couldn't give two hoots about the style, really. It's the substance that makes me love this show.

One example of what I find so skilfully done is the dialogue. The characters say just enough, and no more, leaving the rest for us to fill in for ourselves. Don's scene with the carousel is so exquisite I never tire of watching it.

Sue, I think you point out something interesting about the show - that people who like it, like it (and sometimes love it) for very different reasons. Even Mendelsohn, by his admission, could not tear away from watching it. So no matter what is our individual perception of the appeal, it does appeal, and strongly.

Mad Men has entertained me since it was first aired. The first few seasons were the best, but, unfortunately, in the last season, signs of slippage appeared.

Nevertheless, it has captured something from the era. However, the show, like the era cannot last forever, and its dramatic possibilities may have been exhausted.

Apparently Mendelsohn himself was addicted to watching the show. Is not an addiction to a TV show an admission of enjoying the experience? I think it is, which means the poor guy cannot admit that his true tastes fall below his artificial standards.

For me, the most unwatchable show on TV is "Jersey Shore". After a couple of minutes, it was evident there was no point to watching those clowns, even if one were expecting a car wreck to end everything.

I've never watched the show, but know that it depicts life in the 1960s. Living in the 21st century, the corruption, sexism, racism, and other deceptive, dark phenomena of the 1960s seem too terrible to bare, and modern citizens often do try to avoid looking at this dirty period. However, the show may be intriguing for 2 reasons. First (and related to your idea of "style"), it depicts a period that is more structured than our current society. Of course sexism and racism are terrible, but it provides SOME amount of structure. The past 2 decades have been about change and transformation, which in their very nature requires substantial amount of chaos. This is probably why, as viewers struggle through their daily chaos, they can't help but be drawn to such structured past. Secondly, we need to be reminded of why it is that we're immersed in such transformation and chaos. In ancient Egyptian mythology, Osiris represent the great father who has deteriorated and been corrupted, but the Egyptians knew that he was nevertheless NECESSARY. Similarly, we are fascinated by the corrupt past because such fascination is actually important.
*I want to credit Dr. Jordan Peterson because the theories behind my idea come from his book "Maps of Meaning". Whether I'm using it correctly is uncertain, so I apologize in advance if I'm got it all wrong.