Research Bulletin: Some relation to her 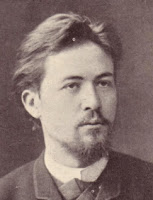 One of Anton Chekhov's favourite stories was the very short piece he called “The student.” The story is simple. It’s about how, on a cold night, round a fire, a theological student tells a story to an old woman, Vasilisa, and her daughter, who are both widows. He then notices that Vasilisa is in tears. The student thinks that there was something in the story which “had some relation to her.”

Was Chekhov personally fond of his short story, “The student,” because he thought the experience of Vasilisa is central to literature?

Ed Vessel, Gabrielle Starr, and Nava Rubin (2013) had people in an fMRI scanner look at images of art works that were unfamiliar to them. The researchers monitored activation of the medial prefrontal cortex, which is part of the default mode network, a system in the brain that is active when a person is at rest, rather than attending to events in the outside world. Activation of this network is associated, too, with inwardness, and also when a person does something, or thinks about something, that involves the self.

The people in the fMRI machine were given the task of rating how they themselves were moved by each artwork they saw. Activation of the medial prefrontal cortex, in the default mode network, suggested that occasionally an artwork was so well-matched to the unique makeup of an individual that it obtained access to the neural processes of the default mode network: processes that are concerned with the self. Ordinarily, external objects do not gain access to this network.

The researchers conclude that they were picking up signs of certain kind of experience that produced a sense of being “moved,” or being “touched from within.”

There seems here a close parallel to what happened to Vasilisa in Chekhov’s story.