Michel Faber's The Book of Strange New Things: A Review 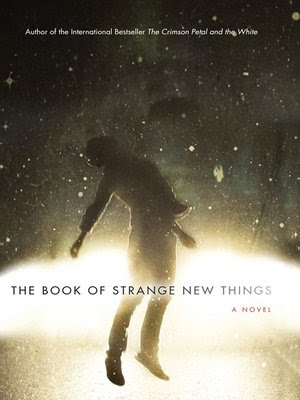 Michel Faber does something remarkable in his novel The Book of Strange New Things (2014). He creatively, and gently but resolutely, sidesteps all those script variations on the aliens theme that make one yawn when reading sci-fi, and the variations on mission stories that make one stop at the blurb on the cover. And the way he does it makes for a very enjoyable read.

His  main character, thirty-something Peter Leigh, is an English Christian minister who has made it through a rigorous selection process to be granted the opportunity to go to a planet far away to minister to the natives. Faber derails our expectations in small ways and large. In the human colony where Peter will be stationed, no one carries a weapon or is engaged in any way in militaristic colonial pursuits. And Peter is not the first minister to work with the natives on the planet Oasis: indeed a good many of the natives already know about the Gospel from an earlier minister, and are already converts to Christianity – so convincingly so that they have names such as Jesus Lover One, Jesus Lover Two, Jesus Lover Three, and so on, and know much of what is written in “the book of strange new things,” (125), the Oasan’s phrase for the Bible. Thus our main character will not get the glory for the original conversion of the natives. Whatever his role on Oasis, it will be, already, in some sense second-order.

When one of the experts on the space capsule headed to Oasis asks him about his role on the planet, he replies, “’I don’t really think of myself as a preacher.’ …. ’I’m just someone who loves people and wants to help them, whatever shape they’re in.’” (49). Peter’s past is one of drug abuse, alcoholism, and at times, homelessness. But his redemption came with meeting and falling in love with Bea, a Christian nurse who tends to him in hospital after he had broken his ankles trying to escape from police. He begins to read Christian scriptures with her, converts to Christianity, and they marry. But redemption already? How can a main character already have found redemption at the beginning of a 584 page novel? Isn’t that supposed to happen at the end of a story? Here we have a main character who is already redeemed, and already mature, empathetic, open to otherness, and not in it for the glory. In a sense, everything is already done. How could an intricate and engaging novel spring from such beginnings?

But all of this ostensibly anticlimactic preparatory work is just Faber very deftly suggesting that a novel set among aliens on another planet need not involve a great clash of weapons; that a minister need not be a missionary, whose primary goal is to introduce a people to his God in the first place; that redemption need not happen only once in a lifetime; and that feeling that one loves people and wants to help them is not necessarily the end of a growth trajectory. None of these themes develops in the way that it might typically be allowed to, and I find Faber’s restraint regarding each admirable.

What this clearing away allows is the consideration of other more interesting questions, as they manifest in this singular setting: How do you maintain a relationship with your partner from many billions of miles away, when the only way of communicating is a form of e-mail? (Time-differentials are of no consequence in this futuristic world – Peter knows before leaving that he can return to earth and rejoin his partner at some point.) Does the quality of a relationship depend in any important way on how well we can express our feelings, or how well we can envision our beloved in their absence? How strange do one's own experiences have to be, in one's own judgment, before they are no longer communicable? What is the relationship between one’s love for a partner and one’s love for God?  How does a Christian minister witness to a group of creatures whose attainment of Christian morality in some ways rivals his own? How do you share the stories of the New and Old Testaments among creatures whose planets have no seas, no mountains, no deserts, and who themselves seem to have no blood, no sexual organs, no eyes, and no teeth? How can a universal message of God’s love be universal in the absence of these physical entities so often used symbolically in scriptures? And further, is a group of socially unattached, highly-motivated, largely unemotional, and accomplished scientists the ideal group to be resident researchers in an alien world? What can and can’t such a group do toward understanding the natives and their world?

Over the course of the novel, it’s evident that having found faith was not the culmination of Peter’s spiritual journey, but a beginning. One night, in a revealing scene, he experiences what he calls his “Crying Jag” (297), which is a kind of unspoken confessional, after waking from a dream he cannot remember, during one of his extended stays among the Oasans. He cries for hours and hours “about the weirdest things, things he had long forgotten, things he would not have imagined could rank very high in his roll-call of griefs” (297). He remembers moments either when he had done harm to others, or when those he loves had had disappointments, or had harm inflicted on them by others. He cries until he can cry no more. Then, from somewhere in the new church building where he sleeps, he hears Jesus Lover Five, whom he did not know had been present, address him. Jesus Lover Five is Peter’s favorite among the Oasans, and another example of Faber’s aesthetically-pleasing restraint – we never learn her or his sex, nor does Peter, no matter the inquiries and body-language reading that he engages in. But Peter loves this Oasan. “A very long song” she or he says, apparently not being able to distinguish song from wailing. She quotes a verse from Jeremiah: “Long ago, the Lord said to Israel, I have loved you, my people.” (300). The invocation of the covenant between God and the Hebrews is an overarching reminder that what matters in the end is relationship. It’s about I and Thou, before, throughout and after grief occasioned by one’s own deep inadequacies or those of others. The Oasan understands Peter, just as surely as herself, or himself, to be included in this sacred covenant.

Through the correspondence between Peter and his partner back on Earth, we watch their relationship deteriorate. On the ground, his friendship -- or is it perhaps more interpersonal ministry? -- with the female colleague, the colony’s pharmacist, develops. He must decide if he should stay on Oasis or return to a catastrophe-afflicted Earth and a severely morally deteriorating population of Earthlings, as well as to an alienated partner, or stay on Oasis where his faith is floundering. Faber’s aesthetic restraint throughout the novel is evident here, too. There’s no predicting the end of this story from the genres this work might be said to rank among.

I agree the restraint and underplaying of usual grandiose literary themes is masterful. I think it's primarily a book about communication, or the difficulties of it. He seems to communicate better with the very alien and alien-tongued & bodies Osans than his own wife whose body he struggles to remember and whose transmissions show an abject lack of mutual understanding (in language, context, gesture and expression are so vital in filling around the edges and with Bea back on earth, they lack for all of these crucial elements).

Also he fails to ever get to grips with the human community on oasis, he is unable to reach them through communication. they seem most 'alien' to him.

Thanks for your thoughts on this important theme, Sulci Collective. Communicating is indeed very difficult for several of the characters in this novel. It seems that it's the communicating of emotion that is most difficult for them. The question is why. For Peter and Bea, it could be that they are so used to communicating by media other than writing that the writing fails them. Or maybe it's the difficulty of each of their circumstances that they can't deal with. They must decide whether to put on the happy face or to write about difficult things that they themselves haven't yet been able to completely figure out or resolve. I wonder if Peter and Bea would have been able to communicate better in this odd circumstance if each had kept a diary for the least communicable thoughts and feelings and put in their letters the parts they had come to better grips with? In that way, each would have been able to express the whole range of feelings they were experiencing, but without needing to worry that they would frighten or hurt the other (and perhaps, in fact, without winding up doing either of those things...) Thank you for your comment.