As a geographer, I have a professional interest in maps -- and one of maps' most important features is how well people can navigate them. I have my introductory students read provocative texts like How to Lie with Maps and I put considerable effort into trying to make the associative chains of the work I do NAVIGABLE. But comprehensibility is a challenging concept. For one thing, as I have explored in past essays, there is the tension between coherence -- an arguably central part of making something comprehensibly navigable -- and correspondence, which could be condiered a crucial measure of the fidelity of a representation. How much fidelity is adequate is a question that nerdy people are probably unlikely to be able answer parsimoniously. And here lies a significant challenge in building successful interaction into the presentation of information.

As the editor least involved in the study of fiction on this site, I often think about the relationship between the various disciplines built into the crafting of fiction and the themes they share -- or do not share -- with non-fiction narrative. As a geographer, for example, I cannot help noting that the vast majority of fiction is far more coherent than most social science writing -- and this is, in many ways, precisely because there are limits to the number of ways one can navigate fiction. Even with all the background experience and interpretation a reader brings to a text, and even with all the "play" inherent in texts, the practice of science requires a radical interactivity to be available in the way a narrative is presented: the reader must be able to recreate the scenario described with adequate fidelity to try for replication of whatever the effects that are being described.

The problem, of course, is that a Science Frame of Mind makes people like me want to give my readers virtual blueprints for replicating the idea that I am following. In a map of a concept, for example, I am likely to include all of the lines of thought: and this is usually too many to make something navigably interactive.

I am spelling this problem out because the tension between taking advantage of the possibility of laying things all out where someone can see them -- where someone can TRACE the lines of thought that might spark additional insight and add yet more fidelity to some model of what is going on -- and the disciplined practice necessary to make interactive navigation possible is difficult not to underestimate. Most of the "voila" moments I witness (in both myself and others) do not have corresponding "oh, I see!" moments; instead, they usually initiate an endless inching from one side and another, in best case scenarios, toward some meeting between the exciting ideas being laid out and what someone might be willing to explore.

In the case I'm currently inching through, for example, we are ninety-eight corrections into making an exuberant series of connections drawn by hundreds of people between parts of the food system (like this -- click images for the linked versions) 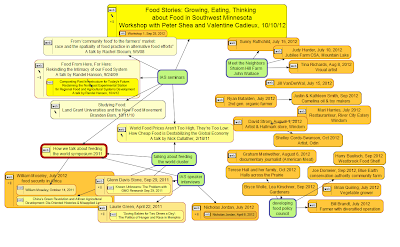 into steps that allow someone to follow at least some of the trains of thought enough that they might be able to add some of their own thoughts in (maybe like this?).

And that seems like the holy grail of interactive narrativity that so little of the internet yet lives up to. (C'mon, comments, show me good examples that show I'm underestimating this! I want to believe in internet 2.0 in its visualization version...)