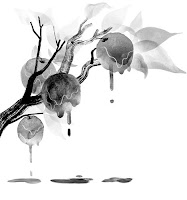 Midway through this year of mapping the epistemologies of food narratives, I was planning to talk about the way that "famine" becomes a fetish in modern food narration. But first I must cover a more basic dynamic in food conversation, partly because I have stumbled across -- almost literally, it is so in my path -- a stunning example I do not understand of how some people shut other people down in their attempts to improve access to healthy food for everyone. I understand that there are many horses in the various races that might be considered to make up the food system -- many people make money from selling or trading in various foods, and agri-food industries remains one of the most significant economic engines of states like mine. These competing interests seem important to be able to explore. And they seem even more important to explore when they involve a number of symbolic associations that seem to explode and end up sinking any chance of productive conversation.

My current example has to do with a seemingly innocuous elementary school kitchen project, attempting to get students more interested in vegetables by offering them tastes not only of exciting dishes, but also of the processes used to bring the food from farm to fork. Dakota County, Minnesota, has been host to a number of innovative garden and other agricultural projects, attempting in a myriad of impressive ways to negotiate the balance between urbanization and agrarian land use that characterizes most urban-edge places. As part of a cohort of faculty at the University of Minnesota committed to the idea that no problem at a university should be a boring one, I am enthused by the idea that "Teaching students about food, rather than just feeding them, has become a growing priority in schools across the Twin Cities." But almost all the responses to this brief article exhibit what one commentator noted as a "cynicism" professed "by people who toss out the usual talking points about "social control" and "personal responsibility"." Countering that "There is nothing wrong with schools promoting healthy eating habits," this last commentator noted that the seemingly inexplicable excited series of responses to such a mild mannered proposal as building more excitement and understanding of vegetables prevent institutions like schools from exploring what more is possible to achieve with healthy food.

George Lakoff has repeatedly reminded us that such inexplicable seeming attacks often act as vehicles for only tangentially related cultural struggles over topics like respect for authority or the expectation of shared morality. And this certainly appears to be playing out in the anguished responses to the idea that schools have a role to play in the development of students' tastes. Objectors (with frightening commentator handles such as "Stamp Out Miscegenation" -- a site Facebook somehow asserts does not violate its anti-hate speech rules) certainly seem to be keying on the "strong father" and authoritative role of parenting trope as the most common theme ("It's not the schools job to teach kids how to eat. ... I am sure you have NO kids to understand this"; "PARENTS, PARENTS It's the parents job not the schools"; "Lifelong eating patterns are established and entrenched in children long before they get to school") -- however, what I find particularly striking in all of these responses is their mode of hostile attack. In addition to the veiled racism of SOM's "Put pork back on the school menu" in his original post, his counter-response to the response I noted above spat, "Feed the kids a diet of union propaganda," a response that seems particularly perplexing given the almost entirely apolitical nature of the short article being discussed (mostly about the growth of connections between schools and farms) and the total absence of a discussion of any of the labor or labor issues involved in producing food on farms or in schools.

As I've often noted, it seems important to be able to engage with each others' narrations of food efforts, and this possibility seems especially promising and compelling given the increasing mainstreaming of discussions about our coming food crisis, as Gary Nabhan called it in his very reasonable recent New York Times op-ed on the challenges facing our food system under climate change (and particularly heat and drought -- although I'm dubious about stirring people up to "crisis" mode, which seems to have higher costs than values, Nabhan's proposed plan seems good: promote moisture- and nutrient-retaining compost, rain & graywater harvesting, perennial food sources, and keeping resilient diverse seed stocks in circulation and propagation). The practice of shooting down others' attempts to work on such large and complex problems that they must be approached from multiple perspectives has social costs that seem untenable, and it seems worth understanding very clearly why and how we might counter and contain this bogus takeover of exploratory dialogue.

As food justice advocates like Toi Scott, Erika Nicole Kendall, and Patricia Allen have pointed out in their excellent recent pieces "“Meet Us at Our Table:” The Problems with the White Savior Complex," "America’s food debates are just white men talking," and "Dancing with (not around) the Elephants in the Room: Building sustainable and equitable food systems for all" we already have a persistent problem not only not talking about important issues like labor and power and race (however one feels about unions, it's difficult to argue that there aren't any problems with these issues as Fast Food Forward begins the largest walkout of fast food workers in history in the U.S. today), but also, even in our well-meaning attempts to connect to the voices and perspectives we don't hear, we tend to overlook or ignore people who are doing amazing work procuring access to healthy food. In such an already difficult domain for discussion, conversation snipers violate the basic mandate we should encourage to build supports for challenging discussions, and to figure out how to have each others' backs when we venture into domains many of us are likely not to know how to navigate successfully, like how to make healthy school lunches appealing.
I have written before about the metaphor shift I appreciated after last year's IATP workshop on food justice, of bringing tables together, or visiting other people's tables, rather than sitting at tables of privilege and always just talking about bringing people to those tables. But this week, visiting my parents' parish, I gained an important lesson in hospitality to add to this table metaphor from an excellent sermon by Mike Fitzpatrick. Discussing the historical role of hospitality, he described the importance of building comfort in order to be able to engage issues at hand -- not with the hospitality, comfort, or engagement as the final goals, but rather as the preconditions for civil society. As I read the angry and defensive comments on this piece I mentioned and so many other attempts to start conversations about important things, I think this understanding of hospitality may be an important tool for crafting exploratory narratives that are not closed down by invocations of responsibility and ways to fix problems, but are rather opened up to many ways, building comfort with difference and the capacity to navigate the discomfort of others' tables.

You claim to promote "how to make healthy school lunches appealing."

Putting pork back on the school menu is most certainly one way to do so.