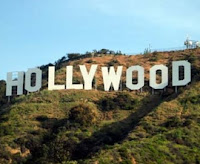 Last month in Hollywood, I attended a conference called StoryWorld 2. Looking to the left from the window of my hotel room I could see the famous sign on the hills. The conference was held in this hotel, part of the building complex where the Academy Awards take place. The complex includes The Babylon Court, which features a ten-storey-tall monumental arch, and giant elephants sitting on giant columns, inspired by the set of D.W. Griffiths's 1917 film Intolerance, which apparently employed 1000 extras.

The attendees at the conference were mostly writers, system designers, producers, publishers, and the like. The concept at the centre of the event was "transmedia." The ever-helpful Wikipedia says the term was coined in 1991 by Marsha Kinder to refer to the "technique of telling a single story or story experience across multiple platforms and formats."

Here is how to think about it. If you were Thomas Malory you wouldn't just write a book called Le Morte d'Arthur. You might do that, but it would be somewhat incidental to your franchise which would centre on the production of the movies Morte d' 1, Morte d' 2, Morte d' 3 …, a television series, and a raft of video games. It would come with the marketing of slinky Guinevere Gowns and a selection of Round Tables in sizes ideal for every home. There would be a game in which people would spear knights who would ride at them full tilt on the screens of their cell phones. Then, at your theme park, actors trained to play Sir Lancelot would first make the acquaintance of women visitors, and then perhaps make an improper suggestion.

Disneyland, invented so we were told at the conference, by Walt himself, was intended as a place in which not just children but whole families could play. It's billed as a place of the imagination, and I can see why. But my sense when I visited many years ago, with my family, was that the roller-coasters didn't leave much to the imagination. They were carefully engineered sequences of visual, acoustic, and proprioceptive input. A Disney imagineer, to whom I put this, said that this was perhaps right, but that members of the Disney Imagineering Research and Development group are very concerned to make visits more interactive. One interesting idea I heard from a member of this group, was that they were considering how actors might be trained to pick up cues from a visitor they would approach, in order to enact a role with which the visitor might be interested to take a complementary part.

The central idea of this second year of StoryWorld was of audience members becoming participants. A person I was pleased to hear was Tim Kring, writer of Conspiracy for good, in which not only did fans communicate with writers, offering feedback, and influencing how things might go in later episodes, but they took part in a conspiracy to defeat the efforts of a large multinational company that wanted to construct a pipeline that was incompatible the building of a library in a village in Zambia. The story-world included trying to find a person who had travelled from Zambia to London to influence the multinational company, and who seemed to have been kidnapped. Over four successive Saturdays in 2010, in London, participants used Nokia cell-phones to communicate with each other, and photographically to pick up electronic tags hidden on graffiti, each of which would unlock the next clue on their cell phone, in a kind of scavenger hunt, to help discover the multinational company's illegal activities. Actors were hired as employees of the company to hinder the participants, and underground concerts took place. The mode has also become known as social benefit storytelling: five libraries were built.

For a long time, dramatists have conceived modes in which audience members would take part in plays as they unfolded, and even contribute to the stories. Many movies are collaborations between writers, directors and editors, influenced also by audience reactions. Novelists talk about the experience of how characters take on lives of their own. What they mean is that the context of a story can start to guide the actions and development of characters in ways they had not anticipated. One of the interesting attributes of the movement of participant involvement in story generation is that such contexts might include participants' engagement in a story as it develops.