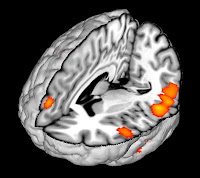 There has been a growing interest in the neural correlates of narrative comprehension, but so far relatively little of this work has examined developmental issues. Part of the reason why this type of research has been slow to arrive is the difficulty of finding reading tasks that are equivalent (in difficulty, among other things) for both children and adults. A recent paper by Koyama and colleagues (2011) took a novel approach to circumventing this problem, by examining how reading competence relates to a different type of MRI measurement: resting state functional connectivity. Resting state functional connectivity examines the intrinsic associations between regions of the brain, as identified by associations in activity while the brain is at “rest,” or not engaged in any particular task. These associations are thought to reveal the strength of different networks of regions, with some brain areas more tightly coupled than others. This coupling, or association, between areas might represent the result of experience, with brain areas that are commonly co-activated during specific tasks (e.g., reading) becoming more and more “in sync” even when we are not performing that task. Koyama and his fellow researchers looked at the strength of associations for reading brain regions across individuals who varied in their reading ability, for both a group of children (8–14 years) and a group of adults (21–46 years). What they found was that better readers had a stronger coupling between language/speech areas of the brain (e.g., Broca’s area and Wernicke’s area) and more strongly connected motor regions in the brain. They also observed a difference between the two age groups. One such difference was a stronger negative association between a word-recognition area and what’s known as the “default network,” a set of brain regions often linked to mind-wandering (Mason et al., 2007). The same was not found for children, however. One interpretation of this finding is that highly automatized reading, such as that achieved by adult expert readers, involves less mind-wandering whereas this might not be true of proficient child readers. A particular strength of this research is that it acknowledges the importance of examining differences across individuals (in this case, of reading ability) and how these differences might relate to neural measures.

Posted by Raymond A. Mar at 08:12
Labels: Research Bulletins