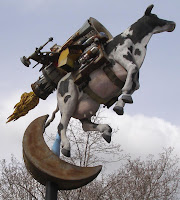 Understanding how the brain operates during highly complex tasks is a daunting prospect. However, along with some interesting developments regarding story comprehension (Mar, 2011), there have some intriguing findings regarding the brain’s behavior during the creation of stories. Howard-Jones and his colleagues (Howard-Jones et al., 2005) asked a small sample of teachers-in-training to generate stories based upon a few key words. Importantly, these individuals were at various times instructed to be creative while generating their story, or uncreative. As well, the words presented to them were at times highly related to one another, or unrelated. For example, a set of unrelated words might be COW, ZIP, and STAR. In response to these words, and an instruction to be creative, one participant created the following story:


This cow got so fed up with people doubting that cows could jump over the moon that it decided to jump over a star. To do this, it wore a special rocket suit. The cow zipped up the space suit, lit the blue touch paper and flew up over the star.

In contrast, a set of related words (BRUSH, TEETH, SHINE) tended to produce a less creative story, particularly when the objective was to be uncreative:

When individuals engaged in this story generation task while being scanned with an MRI scanner, it was found that factors related to greater creativity (relatedness of the words, instructions to be creative) were associated with activation in both the left and right hemisphere (i.e., bilateral activations in the prefrontal cortex) in comparison to more left hemisphere activations during uncreative conditions. This finding is consistent with a previous study that employed a slightly different imaging method (i.e., PET), which found that using unrelated words as a foundation for generating creative stories resulted in more bilateral activations compared to related words (Bekhterva et al., 2000). In sum, it appears that while language has traditionally been viewed as the domain of the left hemisphere, creative tasks such as generating a novel story appear to rely on the right hemisphere as well.

* Apologies for the late posting and for copies of any of these articles, please contact me (e-mail in profile).