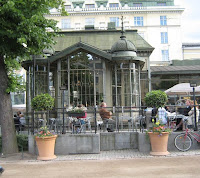 Café Kapelli is a long glass pavilion, built in the 1860s and extended in the 1880s, which stands at the eastern end of a long garden with walkways that lead down towards the harbour in Helsinki, Finland. The building's central part is a classical entrance with Ionic pillars. Its wings are greenhouses that contain people instead of plants. The windows are of delicately leaded glass, in a diamond pattern. Perfect. One wing is a restaurant, the other a café. In the café wing, people sip coffee with a friend, perhaps have a sandwich, or tap on their Mac laptops. Here are bookshelves with novels in several languages. And, in case you've come during inclement weather, here also are coat stands. Over there is a piano. The most favoured positions are in the corners which are made of vertical glass cylinders some two-and-a-half metres in diameter, within each of which three of four people can sit on padded benches around a circular table.

The atmosphere of the café is that of a summer cottage by a lake, but far more convenient because it is in the centre of town. If one had this place to come to, for a coffee, or lunch, or to meet a friend, would one ever need anywhere else?

It is possible to make ratings of beauty, for instance on a scale of 0 (the ugliest) to 10 (the most beautiful). Although it is not grand in size or function I would give Café Kapelli a 10. (So that you can get the sense of this scale: to my eyes the most beautiful building in the world, to which I would give an 11, is the Alhambra, in Grenada, in Spain.)

When it's possible to make buildings that are conducive to human life and purposes and also beautiful, why don't architects say to themselves: "Ah, yes! Now I see how it can be done?" There are towns where this effect has occurred, where builders have taken up the spirit of buildings that have gone before. Venice is one such. Amsterdam is another.

In other places, this idea seems not to have caught on. Hampstead, in London, for instance, has some buildings that get a 10 (on my rating) such as the eighteenth-century houses in Church Row. Pevsner says of Church Row that it is: "the best street in Hampstead, and was better still before the wretched Gardner Mansions were built" (p. 195). Then there is the 1934 modernist Isokon building on Lawn Road (click here) which, although some of its reinforced concrete is slab-like, gets I think an 8.3 for verve. It embodied the idea of people being able to live comfortably, close together in small and convenient apartments. At the same time there is some unpreposessing stuff, worse than Gardner Mansions. I am holding a competition for the ugliest buildings in London NW3. Among contenders is the Tavistock Clinic at the corner of  Fitzjohns Avenue and Belsize Lane. (I'll be happy to hear of other contenders.)

What about the idea that buildings should be conducive to life, should have a social function (in the way Pevsner believed)? If we stretch ourselves mentally, we might think that the Tavistock Clinic, a centre for psychoanalysis, has an unsightly building to remind practitioners and patients, as they enter, of the unseemly nature of the unconscious.

Nikolaus Pevsner (1952). The buildings of England: London except the cities of London and Westminster. Harmondsworth: Penguin.
Image: One end of Café Kapelli, from Google Maps.