The Scroll and the Codex 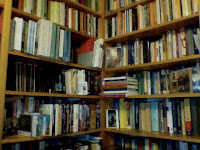 The original form of book wasn't of the kind that you see in bookshops, the kind you array in your bookcases. It was a scroll, written on one side, unrolled from a spindle and rolled onto another spindle in order to read The printed book as we know it is called a codex, developed by the Romans, and made of material written on both sides, folded, and stitched or glued together. The invention of the codex has been regarded as the most important technological innovation in reading before the introduction of printing.

The novelist and journalist Lev Grossman has written, recently, of the great virtues of the codex as compared with the scroll. One can easily jump to any point in the text, for instance to re-read a passage that one read half an hour ago. Although one religion of the book, Judaism, still sticks with the scroll, it is said that among reasons for the success of another religion, Christianity, was that they early went over to the codex.

Grossman's argument, for instance in the New York Times Book Review, is that with the e-book one is regressing to an earlier form of technology, less conducive to reading. With an e-book one doesn't—despite what the interface has you doing with your finger to get to the next part—turn the pages: one scrolls.

By contrast, the codex allows a deep reader to to navigate

the network of internal connections that exist within a single rich document like a novel. Indeed the codex isn't just another format; it's the one for which the novel is optimized (p. 13).

One can pick up a novel one is reading, where one has turned a corner of the page as a bookmark, flip back to the start of the chapter to reorient oneself, glance at the introduction, or at an endnote, see how far one is from the end of the book. Such actions are not easy with the scroll. Like all good technologies the codex gave people access to new abilities. As compared with scrolls, or with movies, the codex enables the reader to progress at a pace, and in an order, that he or she chooses.

I heard Grossman talk, earlier this summer, at the Toronto Book Summit, and there he said that his father was beginning to suffer from dementia, but that his library was still intact. Lev could go in there, see the codex books arrayed on the shelves, pick one out and look at it's cover, and get the sense that here in this room was an externalized aspect of his father's mind.

Though the e-book is good for traveling, do we really want to give up the printed codex?

I do love books, the physical object, I mean. I own a lot of books and more than a few are rare.

But boy, am I getting tired of reading paeans to the object written by people who won't acknowledge the shortcomings of the book and obviously have never used the technology they're complaining about.

It's not true that the open page format of a page means you can find a specific passage. That's why we invented bookmarks, post-its and highlighters. These inventions overcome the problems with locating specific text in a text-rich book.

All those issues are natively solved in a digital text on a reader. You can bookmark, make notes and highlight, and you can do that without altering or defacing the text, by the way. You can search for text and be immediately taken to the relevant location(s). A good digital text will have hyperlinks that allow you to navigate between a table of contents and the text.

Even without a proper table of contents, you can navigate forward or backward and return to where you left off reading. You can also check how far you are into the book, as well.

I have no argument with talking about the physical book as a work of art, they often are. They have beauty and meaning in that beauty.

But, a print book is not, in fact, superior at doing the first job of a book: allowing a human to parse, navigate, comment upon, enter and re-enter the text.

As someone who loves and marks up books regularly (now in pencil with annotated tags instead of highlighters), I vote for the Codex, but I appreciate Carolyn's explaining the advantages of an e-reader as well. I need to get one, but I'll never live without my bookshelves surrounding me. It's the height of lexical pleasure, separated by category: poets, books about poets, mysticism, neuroscience, French literature, Celtic studies, matriarchal myth, women's studies, women's fiction and reference books.

While it is true that you can highlight and make notes with a Kindle e-reader, you cannot do that with the iPad.
www.marksinthemargin.com

Thanks Carolyn, for this comment. I know what you mean about getting a bit fed up hearing all these arguments for the physical book. Many of them are anxieties for the jobs of publishers and booksellers, as well as for the pleasures of book-shop browsing and the like. The reason I found Grossman interesting was that to my mind he raised the question of what each kind of technology, for instance codex, film, Kindle, etcetera, might be optimized for. The bicycle, for me, is rather good for going three or four miles at three or four times the speed I could walk. Your arguments are right, I think. All the same, the codex does seem to me to have established a niche which is likely to remain for a while.

Thank you Carole, for your comment. Like you I probably need to get an e-reader. One question raised by my colleague, Raymond, is "Are they for reading or are they for shopping?" My partner, Jenny, read about a book she found interesting and it took her about one minute to get it on her Kindle.

Thank you Richard for your comment about highlighting and making notes in margins. Perhaps this facility will come along with newer iterations of e-readers, at least if enough people want to do it.