Travelogue: Venice and the Vaporetti 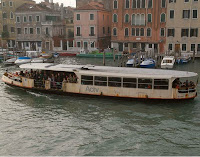 Visiting Venice is always engaging so when my partner, Jenny, and I had a chance to spend a few days there, we took it. We booked a hotel on Hotwire which offers attainable prices at normally too-expensive hotels, but with an element of the unexpected because within an area that you can specify, they may put you somewhere you'd never think of.

The hotel Hotwire chose for us in Venice, Residenza Canareggio, turned out to be impossible to find, because Hotwire did not say what street or canal it was on. At the railway station, I asked the hotel inquiry person where it was. She did not know, even after looking it up on her computer, because in Venice—now they tell us—buildings have a number in a region, not on a calle (alley) or fondamenta (canal-side street). The address of our hotel given by Hotwire was 3210 Canareggio. This would be like an address in New York being 3210 Brooklyn, or in London, 3210 Battersea. Correspondence between numbers and the names of each calle and fondamenta on the maps are known only to the postmen and postwomen. In the end, by dint of many inquiries, we found the hotel in a converted gondola workshop that previously was a monastery on the Calle dei riformati.

At the hotel we related our difficulties to the man at the reception desk. He laughed amiably, and said In impeccable English that Venice is a labyrinth, that being unable to find the hotel was frequent and that some people, even having booked, gave up and checked into another hotel instead. But when we’d settled in we found the hotel pleasant, and the area, two canals north of Campo Ghetto Nuovo, far nicer than some of the more crowded areas. Jenny particularly liked the way people strung their washing up across the alleyways.

What is it about Venice? The canals, yes; the absence of cars, yes. But most of all, being able to walk about and see how the architects and builders of Venice have somehow arranged that even the most ordinary, even the most neglected, even the newest of buildings, looks beautiful and harmonious. Even in a city in which all the larger buildings were constructed to be entered from a boat, one can walk anywhere, and there's a sense of people living close to each other.

And, of course, there's Venice's form of public transport the vaporetto.

Ah, the vaporetto; that most wonderful vehicle. It seats perhaps twice the number of passengers as a bus. A good number more stand to get a better look-out. There are 19 routes, which can take one almost anywhere in Venice and nearby islands. One can tell from its name that this kind of boat used to be propelled by steam, vapore, but it's now propelled by diesel, perfectly acceptable. It is not quick, but it is marvellous both in the prospects it affords on the canals and lagoon, and in operation. Two people operate the boat. One steers and at each stop brings it to within a foot or so of the end of the little floating pier which is the equivalent of a bus-stop. Then the other person throws a sturdy rope over a sturdy cleat on the pier and makes it fast to another cleat on the boat, while the first person keeps the boat in gear in such a way as to wedge it firmly against the pier so there is no gap when passengers walk on and off.

In my most favourite guidebook (to anywhere I have been in the world) Venice for pleasure, by J.G. Links, the author goes into ecstasies, entirely appropriate, about the vaporetti, and even about their timetables, about which he includes this:

It may be presumptuous to write in prose about the … timetable. What is there to add to the pellucid yet dramatic words of the timetable itself? Who but a poet, Shakespeare perhaps … could improve on such phrasing as Servizio accelerato con vaporetti Lido—Canal Grande—Piazzale Roma? (p. 237).