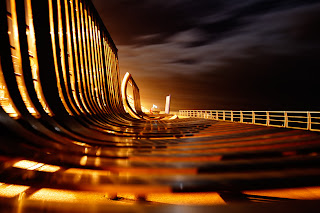 Midway through Isabel Allende’s “De Amor y de Sombra” (Of Love and Shadow), a schoolgirl comes home to an unexpected silence. She knows her parents are away, but what surprises her is that Rosa, the housekeeper, seems to be gone too. Neither the lights nor the heat have been turned on. The house is enveloped in silence. Allende amplifies the effect by letting us know what the girl would usually hear at return from school – sounds of the radio turned on for Rosa’s favorite 6pm radio novella. It is the absence of this one highly idiosyncratic but daily sound in the house that petrifies the girl. Then, the silence is broken by the faintest groan she hears coming from the servant’s wing of the house. Despite the dread, she walks toward the sound.
I’ll leave off the plot here, just as I had to while I was reading the book, to reflect that it all made sense – a lone girl in a house weighed by silence walking toward the faint groan in the unknown part of the house. The psychological sensibility of the scene contrasted with most horror films I have seen, where a similar situation appears to be set up – a protagonist, alone in a house with electricity and telephone lines cut off, hears suspicious sounds coming from the basement. The protagonist then, to my great irritation, decides the best thing to do is to go to the basement.
Reading Allende I realized that she, unlike horror-movie writers, managed to create a scene in which silence, that is, absence of sounds that nature and humans are so fond of making, is understood to be among the most psychologically difficult burdens to bear. The girl in the novel walks toward the groan, because the groan is an evidence of life, and any life, even dangerous and unknown life, appears to be psychologically preferred to the absence of it.
Given this ubiquitous aural phobia among humans, why is it then that existentialists think of silence as a good medicine we should be sure to take once in a while? A clue to the answer could be that there is actually no such thing as complete silence, at least not for any living thing. The girl in Allende’s book hears the beats of her heart pound away in her temples, she hears the sounds of her own body, her own life. The partial silence reveals the sounds of our own tenuous life – a heart-beat, a breath, thin threads looping and twisting, wearing themselves out, until they break.
Perhaps the two kinds of silences do not contrast, after all. Silence that is sought is a teacher of our own fragility, and the unsought silence presents us with fragility of others. One is a meditation on self-exploration, the other, a meditation on loss. And neither is to be faced without courage.
Allende, I. (1985). De amor y de sombra. Buenos Aires: Editorial Sudamericana.
Photo ‘Unknown Silence 2’ by asar123. http://s298.photobucket.com/albums/mm274/asar123/

Silence not only makes us aware of our frailty, but also forces us to listen to our inner thoughts. Silence in the external world means that we must face chatters in our internal being. Sometimes, we simply cannot bear what the unconscious or subconscious is telling, or even shouting, at us. This may be true even for the girl walking down to the unknown basement in horror movies. Facing the external, uncontrollable (and therefore not attributable to the self) fears may be easier than facing the fears inside her.