The Imaginary and the Real 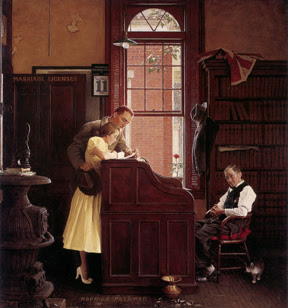 Two weeks ago, I visited the small town of Stockbridge in Massachusetts and discovered it was where the famous American illustrator and painter Norman Rockwell lived from 1953 onwards.

My room in the charming Red Lion Inn had on its wall a print of one of Rockwell's paintings: "Marriage License." It's a picture of a young six-foot-tall man with short hair, wearing a suit, and with his arm protectively round his fiancée who, even in her white high-heels stands on tiptoe as she carefully holds a fountain pen in her gloved hand to sign her name on the license. Sitting on the other side of the big roll-top desk, looking quizzical, reflective, sceptical perhaps, is the town clerk.

This has been, I think, my favourite Rockwell painting. It invites me to imagine the young man and the young woman totally wrapped up in each other and longing—for the year is 1955—to have sex for the first time. The word "License" in the title is a further hint. At the same time the painting exhibits a fine irony, and I imagine the clerk sitting and waiting, not unkindly and not because he has seen it all before, but in a way that indicates that he knows what might be in store for such young people as they set out in a life together.

I thought I would go and see if there were a real location for this picture. I memorized the shape of the window in the painting, turned right outside the Red Lion and, to my delight, there it was, next-door-but-one: a red brick building bearing the legend "Town Offices 1884." Its side windows were those of the picture.

I went back to my room, looked at the picture again and worked out, from what could be seen through the window, where the scene must have been. The window in the picture is now the front door of the Yankee Candle shop, in which the young woman behind the counter confirmed that I had the location right. She also said she thought that the young people in the picture had indeed married, and had lived in Stockbridge. She said there had been an article in the local paper, The Berkshire Eagle, just a week previously, on people who had been subjects in Rockwell's paintings.

Better and better. I looked up the archive of the Berkshire Eagle, and there was the article, by Amanda Korman about people still living in Stockbridge who had been painted by Rockwell. I e-mailed Amanda Korman to see if she knew anything about the couple in "Marriage License," and she kindly cc'd my enquiry and her reply to Corry Kanzenberg, curator of the Norman Rockwell Museum. She pasted into her e-mail to me the wall label of the oil-on-cavas painting "Marriage License" as follows.

Set in the town clerk's office just footsteps away from Rockwell's first Stockbridge studio on Main Street, Marriage License captures Rockwell's fascination with the somber wood-paneled interiors of his favorite seventeenth-century Dutch painters. Indeed, the building itself is fashioned after one pictured in Jan Vermeer's A Street in Delft. In keeping with the older style, Rockwell replaced an existing metal file cabinet in the left foreground with an old railroad station stove. His model for the town clerk had recently lost his wife, and the authenticity of his feelings adds power to the poignancy in this study of youth and old age.

Corry kindly told me about the three people in the picture, and also sent me a link to the series of photographs from the museum's archives, taken by Rockwell, one by one as he staged the setting for his picture, in the way he normally did. Here is that link: click here.) Among his arrangements for this picture, Rockwell brought in the roll-top desk and replaced the office filing cabinet with a large wood-burning stove. Finally he posed the people who would be models for the final photograph which, in his painting, he copied, almost exactly. To see Rockwell's final photographic study for "Marriage License" (from which he made his painting) you can go to the website of a 2009 exhibition at the Norman Rockwell Museum, click here.

The relationship with Vermeer is evocative, because Vermeer was one of the first painters to use a camera obscura (forerunner of photography). He too would pose his models as if in a piece of theatre, to transform a moment in time into the eternity of one of his paintings. (On 15 July 2010 I wrote an OnFiction post on my pilgrimage to Delft to see where Vermeer lived and painted, and in it I discuss the idea of painting as theatre; click here.)

For me, the effect of my research on "Marriage License" prompted a transformation of an entirely different kind: it completely changed the way I saw the painting. Rather than an invitation to the imagination, the picture had become a piece of social history. Knowing that there was a real young couple, who did indeed get married, and knowing now (as Corry told me) that the woman in the picture is still alive and her husband died just three years ago, prompted a completely different impression. Now as I look at the picture I see the young couple as if I were to walk past on the street and see them outside the church door after the ceremony. No more irony. It's no longer a commentary on the social absorption of being in love, no longer the imagination of art, with its layers and implications. It's about the real. I find myself wishing the couple well in their lives together or—knowing now a fragment of their subsequent lives—hoping that their marriage was a good one.


My thanks go to Amanda Korman and Corry Kanzenberg, and to the lady in the Yankee Candle shop. In the transformation from Rockwell's final photographic study to the painting, the words "Town Clerk" on the door have been changed to "Marriage Licenses;" the calendar date has been changed to June 11, 1955 (the date of the issue of the Saturday Evening Post for which this would be the cover picture). There are other changes, too: in the painting, foliage seen through the window has been added and a kitten sidles out from behind the clerk's chair.

Why should the two ways of seeing this be exclusive? The clerk's wistful, knowing look is partly based on his real-life experience? How does this make it less a social commentary? Rockwell still selected him specifically for the role? The same sort of thing applies to most of the rest of the composition. "Real", yes, in the sense that he had concrete models to work from. "Imaginary" in that he did not find them in perfect harmony while on a plein air field-sketching expedition.

The change in attitude you describe is not, it appears to me, a "flip." It is the revelation that what appeared to be purely conceptual was in fact grounded in day-to-day practice. This is true of all arts. Fictions are not created out of thin air, like word salad. Fictions are Frankenstein monsters, only so well sewn together they look convincing. They are staged, always, though one author may be more self-conscious about the artifice of that staging than the next.

Because we know an artist through her/his finished product, we tend to accept that work as a kind of Occam's razor: the simplest explanation is the one most likely to be true. But most experienced artists, especially those like Rockwell who work within traditional schools of artistic creation, put the equivalent of layer upon layer of varnish on their work, smoothing and burnishing to make it more convincingly immediate. The apparent facility and authenticness of a work invariably disguises years of practice, multiple drafts and sketches, careful composition, and practical interactions with the grubby details of the world that then are carefully and usually completely removed before presenttion.

Thank you very much, Natcase, for this interesting comment.

My change in attitude to Rockwell's "Marriage License" did occur, in me, as something like a flip. I agree with you that the two ways of seeing are not exclusive, but I was struck, in my thinking about this picture, by the two different meanings of Aristotle's mimesis from the family of meanings that is about world-creating or simulation to the more widely recognized family of meanings, which is about imitation or copying. I also agree that artists deliberately include many layers in any work of art; this, I think, is part of the world-creating aspect.