Simulation in the Mind and on the Page 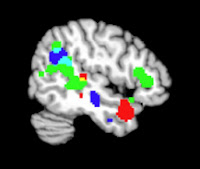 Consciousness seems able to let us decide what to do, and then do it. But recent psychological evidence suggests this is misleading. At least some actions are initiated before conscious decisions to act can occur, and people can be induced by unobtrusive social maneuvers to act in certain ways, but be introspectively unaware of why they acted as they did.

Roy Baumeister and E.J. Masicampo (2010) have been persuaded by evidence of this kind, and have proposed that the function of consciousness is not the immediate initiation of actions. Instead, it is to create simulations of ourselves that inter-relate memory, current understandings of the social world, and evaluation of future actions. Conscious thought enables us to explain ourselves verbally to ourselves and others, and also to compose our minds. Here's what Baumeister and Masicampo say:

The influence of conscious thought on behavior can be vitally helpful but is mostly indirect. Conscious simulation processes are useful for understanding the perspectives of social interaction partners, for exploring options in complex decisions, for replaying past events (both literally and counterfactually) so as to learn, and for facilitating participation in culture in other ways (p. 945).

(Baumeister and Masicampo cite a large range of studies that bear on their hypothesis for instance, one by Silvia Galdi, Luciano Arcuri, and Bertram Gowronski, 2008, for which I give more details in an appendix at the end of this post.)

For a long time fiction has been seen as augmenting the functions of consciousness. Baumeister and Masicampo give us a good way of thinking about how this might occur. Fiction consists of crafted and externalized simulations: twins of our internal simulations. Plays, novels, short stories, and films, can be internalized by us readers and audience members to add to the construction of our own inner simulations.

Baumeister and Masicampo gives an example of a use of consciousness in planning:

... when one has a plane to catch tomorrow, one typically engages in a simulation that calculates backward from the plane’s takeoff time, allowing for airport procedures, the trip to the airport, and perhaps the hotel checkout before that, so one knows at what time to commence the sequence of acts. All the information used for this simulation is already in the mind, so conducting the simulation does not bring in new information from the environment ... These simulations work remarkably well in enabling people to be on time for their flights without having to spend many extra hours at the airport (p. 955).

I call the means by which this kind of function is accomplished the planning processor, the mental device by which we arrange our projects in the world. It requires a model of how the world works, and it offers the opportunity to arrange possible actions in the form of a plan.

When tracking the actions of a character in fiction, a reader or audience member uses this planning ability within his or her mental simulation: an author gives the reader information about the setting and the protagonist’s goals, then starts readers off on a plan. Then the author says what is accomplished and what events occur, including those in the minds of the protagonist and other characters. As we put aside our own goals and plans, and take on those of a protagonist, we enter that character’s patterns of conscious thought and come to know outcomes of actions. But the emotions that result are our own.


Appendix: Galdi et al. (2008) studied people's conscious thinking and sub-consciously activated associations about a controversial proposal to enlarge a US military base in their city. Conscious beliefs were assessed by a 10-item questionnaire on environmental, social, and economic consequences of the proposal. Associations were measured by an implicit association test, in which people pressed buttons in response to pictures of the military base and evaluative words. People's decisions were measured by them saying whether they were (a) in favour of the base's enlargement, (b) undecided, or (c) against the enlargement. For the decided people, their conscious thoughts were highly predictive (p < 0.001) of both their decision and their automatic associations one week later (p < 0.01); but these people's automatic associations at the time of first assessment were not predictive of their decision a week afterwards. By contrast, among undecided participants, their conscious thoughts at first did not significantly predict their later decision, but their unconscious associations did significantly predict their decision (p < 0.05) and their conscious beliefs (p. < 0.01) a week later. This study may seem rather complicated. My view is that it indicates that our conscious thoughts are affected by processes of which we are not consciously aware—including the processes that produce our emotions—and that, rather than conscious thoughts being always able immediately to control what we decide they can, instead, work over a longer term to affect the structure of our minds, for instance as we think about an issue, become aware of our emotions about it, and discuss it with others.

"So much in writing depends on the superficiality of one's days. One may be preoccupied with shopping and income tax returns and chance conversations, but the stream of the unconscious continues to flow undisturbed, solving problems, planning ahead: one sits down sterile and dispirited at the desk, and suddenly the words come as though from the air: the situations that seemed blocked in a hopeless impasse move forward: the work has been done while one slept or shopped or talked with friends..."--Graham Greene, Book One, Section Two, "The End of the Affair"
(Greene goes on to describe an important decision of the narrator constructed in this below-the-surface manner.)

Thank you very much, Mark, for this lovely quote. It's a nice thought, isn't it, that consciousness can continue in the unconscious?

I am glad you liked it! I myself like the idea that a problem can get solved during sleep... if only it would happen more often!