Rules We Live By 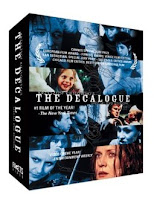 On 11 October, I reviewed Decalogue 1 to 5 a set of one-hour films set in Warsaw and directed by Krzysztof Kieslowski (click here). In this post I review one of the films, number 8, in the series Decalogue 6 -10. A review of all five of these films can be found in the OnFiction archives: Film Reviews (click here).

The Decalogue films pose questions about how we should act in the dilemmas we encounter in life. This issue has excited considerable interest in psychology with the advent of trolleyology, the study of people's responses to vignettes based on ethical problems of what a person should do when he or she sees a trolley running along some rails in a way that it might kill one or more people.

In the basic trolley problem, participants are told that a trolley is running along some rails so that it will kill five people. Would they switch some points so the trolley runs onto another track on which it will kill only one person? Most people say yes.

Such problems seem to tap moral intuitions. One result that has caused interest is by Michael Waldemann and Jorn Dieterich (2007). They compared the above vignette with one in  which participants had to decide whether to push a very large person from a bridge onto the trolley line in such a way that this person would be killed but would halt the trolley before it could kill five people on the line. The researchers say that although people are willing to affect an inanimate object such as a trolley, by switching points, they have an intuitive reluctance to act on a person directly in a way that condemns him or her to death, even if it results in saving a larger number of people.

A trouble, as it seems to me, with vignettes of this kind is that they present puzzles in a very schematic way. By contrast, Kieslowski's films deal with comparable issues in works of art designed to put ethical problems to us so that we can experience the social world in relation to our fears and our yearnings to do the right thing. Several of the films in the Decalogue series are extremely moving so that  one feels oneself immediately into the positions of the people who must make difficult decisions.

Decalogue 8 for instance is about Zofia (Maria Koscialkowska), a senior professor of ethics at Warsaw University. A researcher, Elzbieta (Teresa Marczewska), visits from New York, and is invited to sit in on one of Zofia's classes. In a class discussion, Elzbieta poses a problem: a six-year-old Jewish girl in Warsaw in 1943 is taken to a family who have said they will be godparents so that the girl can be christened and adopted rather than be deported as prescribed by Nazi law. The putative godmother says she has changed her mind. She cannot be godmother: her religion forbids the bearing of false witness. It looks as if the six-year-old is being condemned to death. Did the woman refuse for the reason she gave?

It turns out that another family saves the six-year-old, who grows up to be Elzbieta, the researcher. The woman who was expected to be her godmother is Zofia, the professor. Why did Zofia act as she did? Is there anything Zofia could now say that would satisfy Elzbieta?

The question raised by this beautiful and thoughtful film is very well put, and well worth thinking about. This moving film (Decalogue 8) is worth much, much, more than the hundred words of a vignette.