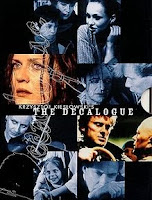 Not many films seem designed to prompt the kind of reflectiveness that can occur with the best print fiction and, among those are designed with reflectiveness in mind, few achieve it. One set of films that does achieve such effects is The Decalogue, written by Krzysztof Kieslowski and Krzysztof Piesiewicz, and directed by Kieslowski. In these ten one-hour films made for Polish television about the effects of human actions on other people, the Ten Commandments act as starting points. The films are so good, and sufficiently important in the history of cinema, that they are often shown at festivals and suchlike. They are available in a DVD set.

The first Commandment is: “I am the Lord thy God. Thou shalt have no other Gods before me.” Decalogue 1, the film associated with it, is about a university professor (Henryk Baranowski) for whom the computer has become the new god. He is constantly making calculations. It is winter. Ice covers the lake near where he and his ten-year-old son (Wojciech Klata) live in a relationship of tender affection. The father asks his son to phone the weather bureau to find what the temperature has been on each of the last few days. He takes the data, makes a calculation on his home computer, and tells the boy that the ice will bear a person three times his weight. The father has just given his son new pair of skates. A surprise thaw occurs and the ice does not support the boy’s weight. With our knowledge and technology, might we over-reach ourselves?

In his introduction to the screenplays of The Decalogue (Kieslowski & Piesiewicz, 1991), Kieslowski said that the mid-1980s, when these films were made, was a difficult time in Poland. Dissatisfaction contributed to the Solidarity movement. Martial law was imposed. Socially, everyone suffered hardships, shortages, constant problems with the bureaucracy. The bleakness of the times comes through, but the writers of these films wanted to treat neither politics nor the daily grind. They wanted something universal: to make films about “extraordinary situations for [their] characters, ones in which they would face difficult choices and make decisions that could not be taken lightly” (pp. xii-xiii).

Fiction generally, I think, can invite us into situations that are both universal and extreme, so that we can imagine ourselves making choices in them. A full review of the first five films of The decalogue can be accessed in the OnFiction Archive of Film Reviews (to the right of the screen, or click here). The best of these films are brilliant, and overall the collection gets four stars on our one-to-five rating scale.

I believe to understand Kieslowski's Decalogue series of episodes made for Polish TV, one needs to have the time to view them together and not separately. As Kieslowski remarked, the Polish audience tended to lose the connection between the films because of the fact that they were aired once a week each Sunday rather than one a day. Also, as opposed to a cinema setting, the average household would have disturbances going on, kettle boiling, children playing, etc., which would not help in the thought processes required to understand where Kieslowski wanted to take his audience. He certainly did not wish his films simply to remind his Polish and predominatly Catholic audience of how some ten commandments might apply to them but rather wanted to ponder things over and ask questions of themselves.

Thank you very much, Alexandre, for this comment. I think Kieslowski's idea, that you describe, of audiences seeing the whole sequence of his Decalogue films fairly closely together seems absolutely right. I think each of the films invites reflection but, as you say, the whole sequence does indeed offer a very moving basis for thinking about how we live, and about how we should live. The DVD set that one can buy now enables one to see the films over a short period and thus to keep all of them in mind as one ponders. I'm going to review Decalogue 6 - 10 in an upcoming post, probably at the beginning of November.

I look forward to your review, Keith. Please feel free to add yourself to my Guestbook and add your blog details and description. Perhaps, after you have seen Decalogue 6 - 10, you might like to start a new post on my Forum with your views and comments. As you say, it's good to have the DVD collection available; I have the Artifical Eye 2-DVD collection. When I first saw them screened on television the easiest one to pick up on was Decalogue 1 but after seeing the others I began to see what Kieslowski was up to. I won't say anymore at this stage until you have done your review. Suffice to say that Kieslowski linked out to everything that followed Decalogue. I am still finding this out even now! Almost impossible to comprehend these links in a cinema setting unless you buy lots of tickets and go back many times! I bid you a very good day for now.