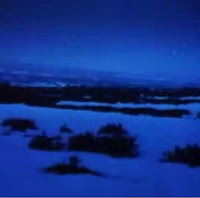 Sonia Zyngier's lovely essay that we posted on Thursday (click here) set me thinking about endings of works of narrative fiction. Sonia quotes the last paragraph of James Joyce's "The Dead," and in my view this is one of the very best literary endings. It reminded me of another ending: the words said by Horatio to Hamlet as he dies in William Shakespeare's Hamlet.

Both these endings are based on synecdoche, which comes from the Greek, and means something like "understanding at the same time." It's a figure in which a part stands for a whole. To put it in this way sounds dry and pedantic, but this figure has been the basis for some of literature's most profound endings. Here's the one from Hamlet. As Hamlet dies, Horatio says:

It's been said that these are the two most beautiful lines in Shakespeare, and I agree. They are based on a succession of synecdoches, a succession of expansions. In the first of these lines, "heart" stands not only for the life of the body but for the very core of being. "Good night" is said at the small leave-taking we can make each evening with anyone who is with us. Here it points to a complete departure. In the next line, "sing" stands for a ceremonial in which we join together to recognize something of the importance of each human life, and "rest" for the final resting state. The figure of synecdoche is suggestive. What we make of the expansion it suggests is up to us. For me the succession of invited expansions in Horatio's lines, perhaps especially the "Good night"—words that have been said to all of us from childhood onwards—prompt a sense of inclusiveness that I find extraordinarily moving. And so, as I put it in a 2004 article (page 328):

this culmination … is metonymic: it is a synechdoche (part for whole) in which we experience a singular event, the death of Hamlet, as emblematic of the larger fate of humanity … Our emotions expand from Hamlet, an individual character in fiction with whom we feel intimacy, to an inclusive empathetic understanding of the plight of all humankind, caught up as we are in, "accidental judgements, casual slaughters … purposes mistook."

In a comparable way, the ending of James Joyce's "The Dead" is this:

Yes, the newspapers were right: snow was general all over Ireland. It was falling on every part of the dark central plain … His soul swooned slowly as he heard the snow falling faintly through the universe, and faintly falling like the descent of their last end, upon all the living and the dead.

Here, again, is an expansion from the particularities of a literary character—Gabriel Conroy's  sexual longing, his disappointment, his jealousy, his feeling of ordinariness in not having fulfilled his own aspirations and in not having been what his wife has most desired—to a generality: the snow as it falls "faintly through the universe" on everyone, "upon all the living and the dead."

Keith Oatley (2004). Scripts, transformations, and suggestiveness, of emotions in Shakespeare and Chekhov. Review of General Psychology, 8, 323-340.

Image: Part of a still from John Huston's film of "The Dead."