Travelogue: In Delft with Vermeer 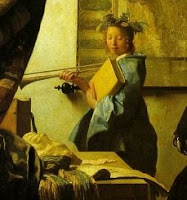 Last weekend I went on a Quixotic quest to Delft, to try and think myself into the mind of Johannes Vermeer who spent his whole life there. I love Vermeer, especially his painting that is usually called "The art of painting."

"Delft is very touristy," said one of my Dutch friends. Well, it is. But I was being a tourist, and few places in Europe are more charming than Delft, with brickwork streets and alleys, canals with waterlilies, beautiful buildings and bridges, freedom from the infernal combustion engine. To be a really good tourist town in Europe, a place must have been rich several hundred years ago, must not have been bombed in World War II, and must have avoided the high-rises. Delft has these characteristics. It became rich in the age of Dutch colonialism when Vermeer lived.

Only 35 of Vermeer's paintings exist (Schneider, 2000). All but two have women in them. In ten of them, a woman is depicted as concentrating on some activity such as pouring milk, writing or reading a letter, playing a musical instrument. In 11 of them, a woman looks directly at the artist, that is to say at the viewer.

Vermeer was interested in science. He seems to have been one of the first painters to use a camera obscura, and he seems also to have been fascinated by the geometry of the perspectives he created. In the domain of painting he seems to me to have been interested in those matters about which Elaine Scarry (1999) wrote in the domain of prose fiction: how the artist invites the reader—or in this case the viewer—not just to glimpse objects, but to construct scenes. So, as well as perspectival textures such as tiled floors, in 15 of Vermeer's paintings there is illumination of an interior from a window, always on the left of the painting, that infuses a bright glow from that side. Vermeer carefully depicts the transparency of the window glass and the grey of cast shadows. He chooses frequently to offer reflections in mirrors, windows, wine glasses, even earrings. It's as if he is saying to us: "Here are the cues; from them you can construct this scene in your mind."

Although Vermeer is often described as a marvel of naturalism, every one of his interior paintings is a piece of theatre in which the subjects' clothing has been carefully chosen, and emblematic props have been deliberately arranged. The subjects are not so much portraits, as depictions of characters of a kind one might come across in fiction or allegory. Scholars agree that the central figure of "The art of painting" is Clio, the muse of history. She wears a laurel wreath. In one hand she carries a trombone, which signifies fame. In the other hand she holds a book: written history. Behind her is a map of the Netherlands. This painting isn't about painting. It's about a hope for a historical event. Though it used to be dated earlier, it now seems that it was painted around 1672, when the Netherlands was threatened with yet another invasion by one of its European neighbours, and  was hoping to make an alliance with another of them. Not only were Africa, India, China and the Americas invaded by European colonizers but European countries invaded each other. In this picture, it seems, Vermeer hoped that history would be written of how the Dutch had held out and won a famous victory.

I was in Delft on the day of the World Cup Finals. In the evening before the match, streets, squares, and cafes were full of hopeful young men and women in orange T-shirts. Now that the age of European colonialism has thankfully receded, the desire to conquer distant lands and the competition among European countries has come down to football. Can one imagine Vermeer today painting Clio with an orange T-shirt, and holding not a trombone but one of those raucous trumpets that were blown so incessantly by spectators at the matches in South Africa?

In "The art of painting," which should perhaps be renamed "The hope of history," Vermeer depicts Clio with her eyelids lowered, perhaps in modesty. Am I too fanciful to think her lowered eyelids might signify shame? The history of European nations gives us plenty to be ashamed of. Even so, Vermeer has given us some of the world's most wonderful paintings. I visited the place where he is thought to have been buried, in the Oude Kerk. In this striking and austere church there is a very small, very plain, plaque on the floor that says simply "Johannes Vermeer 1632 - 1675." Beside it, were two bunches of flowers and, very movingly, beside the smaller bunch—placed there, so I imagined, by a painter who was grateful for the inspiration that Vermeer has given us—two paint brushes had been laid.

in Delft you can also visit the rebuilt guild house, of which Vermeer was president during the last years of his life, with exhibs about the city in his century, all his works, his techniques, his contempraries and the symbolism in his work.
Also at Prinsenhof museum many paintings of his contemporary artists can be seen.
Sadly Delft does not have any original Vermeers left, but you can also make a walk around town to places he worked and where he drew his "view on Delft"

Thanks very much for this comment. I found the Vermeer Centre in Delft, which is in the Guild House that you mention, very good and informative. But—as you say—you have to go to Den Haag and Amsterdam to see the Vermeer paintings that are in still in Holland. And walking round Delft is lovely.

Den Haag is very close to Delft, either by tram or train--train is more reliable! The Mauritshuis in Den Haag is fantastic--they have one of my favorite Vermeers: View of Delft. It's large and almost square. They also have The Girl with the Pearl Earring--not my favorite Vermeer. I've stood where View of Delft was painted--it doesn't look that much different now. How I love Vermeer. He reminds me of Brahms, who produced relatively few works but all meticulously crafted.

Thank you very much for this. In my Quixotic quest in search of Vermeer, I did also go to Den Haag, to visit the Mauritzhuis, just as you suggest. I agree that the "View of Delft" is totally wonderful, and I, too, went and stood, on the other side of the canal in Delft, to look at the town from where this picture was painted. I agree, there is something so moving about Vermeer, not in all his paintings, but some of them that include this view. Does this movingness have to do with the intensity of Vermeer's involvement in them, so that they are not just paintings but pieces of consciousness, pieces of thoughtful engagement with the world?