Men and Women Write About Each Other 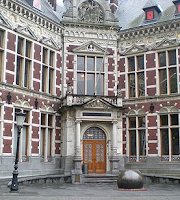 The 2010 meeting of the International Society for Empirical Research in Literature (IGEL, click here) has just come to a close in Utrecht, Holland, organized with consummate skill and thoughtfulness by Frank Hakemulder and a team of able assistants. Amongst the traditions of the Society is to award a prize to the best presentation by a graduate student at each conference. This year the prize goes to Molly Ireland, who works in James Pennebaker's group at the University of Texas at Austin.

Ireland and Pennebaker used the Linguistic Inquiry and Word Count (LIWC) system for making computer counts of different kinds of words in texts. They analyzed 2495 transcripts of naturalistic conversations,  found gender differences of usage of function worlds in seven categories. For instance, as compared with men, women used more expressions of the kind "I think …" "I guess …" which might indicate more tentativeness, or more salience of issues of theory of mind.

These results raise a set of interesting questions. First, should writers study results of this kind, derived from the scientific study of literature? My view is that the the answer is yes. Of course they should.

And now comes the real question, raised by Molly Ireland in her talk at the conference: what then should writers do about this kind of effect? Should they strive for the natural, or should they exaggerate a bit?

My view is that in general writers do well to pay attention to John Keats when, in an early statement of the principle of defamiliarization, he wrote that "poetry should surprise by a fine excess." This goes for prose, too, I think, and even for movie scripts. Conversation in ordinary life functions to maintain and develop the relationship between the conversants. Dialogue in fiction is quite different. It has the function, first, of taking forward the story, second of delineating character, and third of building a relationship with the reader or viewer. If gender is important in this second function—delineation of character—which it very often is, then emphasizing differences by means of a "fine excess" may probably be what a writer should think of doing.

Molly E. Ireland & James W. Pennebaker (2010) Do authors have an ear for the opposite sex? Presentation at the meeting of the International Society for Empirical Research in Literature, Utrecht, Holland, 7-11 July.

Very interesting. What were the other 6 categories?

The categories, which mainly replicated Newman, Groom, Handelman, & Pennebaker (2008), were first person singular pronouns (e.g., I, me, my), third person singular pronouns (e.g., he, she, hers), conjunctions (e.g., and, but, while), common adverbs (e.g., quite, so, very), auxiliary verbs (e.g., am, were, shall), prepositions (e.g., with, beside, about), and articles (e.g., a, an, the). Women use the first five categories more than men do, and men use the last two more than women.

Which is the better approach is, I think, still a pretty open question. Although I tend to agree with Keith and others that good dialogue might need to be dramatic (exaggerated in some ways, smoother, and with fewer narrative gaps) in order to provide readers with the right cues to be transported and to take characters' perspectives. Either way, if Hollywood dominance is any indication, audiences seem to prefer men's more dramatic approach.

Thank you so much, Molly, for clarifying and filling out the information in you research on male and female differences in script-writing male and female characters. This is extremely helpful.

Thanks, Kate, for your interesting thoughts on this subject. What you say sounds right, though I think it might be hard to test this by analyses of the texts themselves. Perhaps interviewing writers, in the light of Molly Ireland and Jamie Pennebaker's findings, would be the way forward.

That's a good point, Kate. Women might deliberately write characters who break gender rules more often than men do. Maybe they write a handful of characters who are, like male authors' characters, hyper-genderized, and then they write the rest of their characters like you suggested, reverse-genderized. The result might be that, on average, women look as though their characters are generally very subtly genderized in the right direction (women slightly more feminine than men).

I could investigate that really quickly by seeing whether there's greater within-author variance in the 7 gender-relevant function word categories for women than for men. Later on it might be useful to have judges code characters as traditional or nontraditional in terms of masculinity and femininity, and then to see whether the function word patterns back up audience intuitions.

Or, like Keith said, at a broader level we could come up with a way to rate each author as someone who generally does or doesn't follow gender stereotypes in their scripts. That's a pretty complex question that might be hard to operationalize though. For example, Joss Whedon might be thought of as a good example of a man who writes women who don't follow gender stereotypes, at least in terms of dominance and physical strength. But in a lot of ways even his strongest, most dominant characters (e.g., Buffy, Echo) are very traditionally feminine.