Research Bulletin: Scene in the Imagination 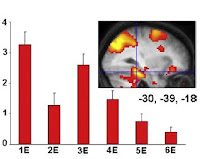 How does a writer enable a reader to imagine a scene? A paper by Jennifer Summerfield, Demis Hassabis, and Eleanor Maguire (2010) has offered a step towards answering this. Recent studies of brain imaging have identified what researchers call a core network of brain areas that are involved in: memories of events from our lives, imaginings of future possibilities, and navigating in the world (click here). Researchers study these processes to understand how we negotiate the day-to-way world, but it seems likely that they are also involved in sustaining the simulation that a reader constructs when reading a novel or short story.

Summerfield et al. have—as they put it—slowed down the constructive process of imagination by presenting to participants in an fMRI machine between three and six spoken phrases, each of which is an element of a naturalistic scene. Here is an example of three phrases (elements) they used: "a dark blue carpet" … "a carved chest of drawers … "an orange striped pencil." As they heard each succession of phrases, participants were asked to imagine a scene containing the elements, and later to report on the vividness of the result. At the same time, the researchers were looking to see which brain areas were activated as each element was presented. They identified three brain areas of the core network that were important: the hippocampus (plus some associated areas), the intra-parietal sulcus (plus another area), and the lateral prefrontal cortex.

The idea of this study bears a striking parallel to the ideas of Elaine Scarry (1999) who has proposed that, to enable a reader to imagine a scene, a writer must offer what she calls instructions. She says Thomas Hardy and Marcel Proust are particularly good at this, and she gives some helpful ideas about the kinds of instructions that work well for constructing scenes (see micro review in our Archive: Books on the Psychology of Fiction).

I find it interesting that Summerfield and her colleagues used descriptive phrases rather than just words as their elements. This reminds me of Gabriel Garcia Marquez saying in an interview that in fiction it's no good writing "There was a butterfly." One must write: "There was a yellow butterfly."

I don't know whether anyone has counted the number of phrases different writers use to prompt their readers mentally to construct a good scene. I happen to be reading and re-reading my way through Anton Chekhov's short stories. As I was writing this post, it  occurred to me to count the elements in a scene that was sufficiently vivid for me to remember from a story that I had read an hour previously. The story is "Gusev" in Richard Pevear's and Larissa Volokhonsky's translation of Chekhov's stories. It is about a discharged private solider, Gusev, who has been in the East for five years. He is on a ship supposedly on his way home. Although neither Gusev nor we the readers know it at the beginning of the story, he is dying. He imagines a scene from his homeland:


He pictures an enormous pond covered with snow … On one side of the pond, a porcelain factory, the color of brick, with a tall smokestack and clouds of black smoke: on the other side a village… Out of a yard, the fifth from the end, drives a sleigh with his brother Alexei in it (ellipsis points in the original, p. 110).

Is this three elements? It depends, I suppose, on how you count. I count the pond, the factory, the village with a sleigh. In the story, the ex-soldier starts to elaborate the scene in his memory. His brother is tipsy, and in the sleigh are his brother's children. Each element is more elaborate than any used by Summerfield and her colleagues. And—as is usual in a story—in the scene, actions begin to occur; the sleigh driving out is one such, and the next is one of the children in the sleigh laughing while the other's face can't be seen because it is wrapped up. Gusev thinks the children might be getting chilled. Perhaps the fMRI researchers are right.  Perhaps three elements are enough to get a good scene going. But perhaps the writers are right, too: the next thing for research might be that, after establishing parts of a static scene, they might consider an experiment in which actions occur. Elaine Scarry also has good things to say about giving readers instructions for imagining actions.

Image: From Summerfield et al.'s paper, showing the activation of the hippocampus as greatest with the first element (1E) and third element (3E) in the presentation of a series of descriptive phrases.

Keith,
This is interesting. However, I wonder whether it might not be just a bit more complicated. How do we distinguish between "descriptive" and non-descriptive words?

The problem I am anticipating comes out a debate in the philosophy of language about the role that proper names and indexicals/demonstratives ("this", "that", "I", "here", "today") play in contributing to the content of propositions. It looks, at first glance, as though these words lack any descriptive content. "John Smith" just means the person. However--venturing to take a view about something when I haven't kept up with the literature--there do seem to be proper names that acquire descriptive content. (e.g., "Hitler" or "Napoleon")

This does not affect the substance of what you are saying; but the connection between specific words and the thought in the mind of an audience might not be so easily discerned.

On the other hand (at the risk of contradicting myself), maybe the phenomena I mention above are more occasion-specific, and need not concern
a writer. I'm not sure...

Perhaps, I should have begun these remarks with the words: "For what it's worth..."

I remain a regular reader of "On Fiction" and do so with consistent pleasure.
Mark L.

PS: I've also managed to read your new novel, and it has provided me with much stimulation which I hope someday can be channeled into a piece of writing... Briefly, I don't know that "existentialism" actually does get to the bottom of the truths about human action and ignorance,... though I do think (having been forced to think about it largely because of what you've written) it contains some fantastic insights...

Thank you Mark. I do agree that things are more complicated, much more complicated than I indicate here. The truth is far closer to what you suggest, with many effects from different kinds of language. We can see this, I think, when we look at the kinds of effects that are achieved by different writers. What excites me about work of the kind that Summerfield, Hassabis and Maguire are doing is that at last there is a meeting of cognitive and neuro-scientific research with the kinds of analyses that literary theorists like Elaine Scarry are making.

I am delighted you like our blog. Thanks very much for your appreciation. And thanks too for your kind words about my novel, Therefore choose.