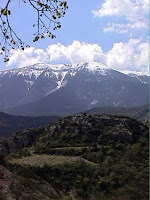 Last month OnFiction had a birthday. We have been on the web-waves now for just over two years, and this is our 282nd post.  We generally have between 50 and 100 unique visitors a day to our site. We are read also by the many people who take OnFiction as Followers and who receive it by e-mail, RSS, and other feeds. We would like to thank all of you, our readers, for being with us, for contributing with your interest and your comments.

A group of us started OnFiction because we had met every two or three weeks over a few years as a writing group. Then one of us moved away from Toronto and another had a new baby. OnFiction became a way of continuing to share our intellectual life on the topics of writing and reading, and also a way of opening it to others whom we did not know.

Until I read Johan Huizinga's biography of Erasmus, I had not realized that, before the coming of print culture which Erasmus was one of the first to use, although people would address handwritten letters to particular people they often intended them to be read more widely. Alongside formal readings at churches and synagogues, and lectures in universities, and before the emergence of magazines and newspapers, letters were means by which ideas could circulate. People would pass them around. You can see a vestige of this practice in some scientific reports called "Letters"  to the journal Nature. In the nineteenth century, letters became more exclusively personal and intimate. Sealing wax, and subsequently envelopes, became normal. The purpose of letters had narrowed to become the continuation of conversation of the kind that functions to maintain close relationships.

The blog, therefore, is the perfect descendant of the kinds of letters that circulated before the age of print.  No longer tied to the physical, thoughts in the form of electronic words can now be passed around more widely than previously. Our blog is written with particular kinds of readers in mind to offer you ideas that you might find worthwhile, and to keep you to date with news. When I write a post, it is for the group who run the blog and at the same time for those of you who share our interests in the psychology of writing and reading fiction.

Here, below, is a  snippet of a letter by Francesco Petrarch about his ascent of Mount Ventoux. My attention was first drawn to it by Valentine, one of our group. You can read the whole letter online at the Medieval Source Book, by clicking here). It is dated 26 April 1336. Petrarch says his letter  derived from "hurriedly jotting down these experiences on the spur of the moment," at an inn after he had returned from his all-day climb, while the servants prepared supper. Although he may have jotted down some notes at that time, we can infer that he subsequently reworked them carefully to achieve his final 3400-word version which is elegantly phrased with many correct quotations. Although addressed to his confessor, he seems to have intended it to be read also by others. It has now been read by many, and represents an important moment in Renaissance self-reflection.

To-day I made the ascent of the highest mountain in this region, which is not improperly called Ventosum. My only motive was the wish to see what so great an elevation had to offer. I have had the expedition in mind for many years; for, as you know, I have lived in this region from infancy, having been cast here by that fate which determines the affairs of men. Consequently the mountain, which is visible from a great distance, was ever before my eyes, and I conceived the plan of some time doing what I have at last accomplished to-day … [we] started off at a good pace. But, as usually happens, fatigue quickly followed upon our excessive exertion, and we soon came to a halt at the top of a certain cliff. Upon starting on again we went more slowly, and I especially advanced along the rocky way with a more deliberate step. While my brother chose a direct path straight up the ridge, I weakly took an easier one which really descended … no human ingenuity can alter the nature of things, or cause anything to reach a height by going down. Suffice it to say that, much to my vexation and my brother's amusement, I made this same mistake three times or more during a few hours.

Petrarch takes this as a metonym for how, in his life, he had often taken wrong turnings.
Johan Huizinga (1924). Erasmus and the age of Reformation. New York: Harper Torchbooks (current publication 1957).

Thanks to you, too, for maintaining this blog. It's one of my regular reads.

Thanks very much Alex. I'm really glad you like our blog.