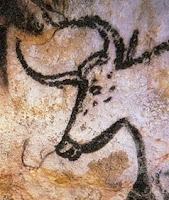 Stanislas Dehaene is a French neuroscientist, who has a background in mathematics, experimental psychology, and brain research. He is known for his work on the neural basis of numerical thinking, but in his most recent work he has turned his mind to reading. His book on the subject—Reading in the brain—is a very good read.

Dehaene's basic idea is that the neural processes that are used in reading, an activity which is only about 5000 years old, must have been pre-adapted or, as Dehaene says, "recycled" from processes that had already been in used for something firmly established and important in vision. Dehaene argues that the part of the visual system that is suited for analyzing patterns of the kind of which letters such as Ts, Ls, and Ys are made is that which has been used for many millions of years for recognizing edges and corners, the branches of trees, and so on, in the natural world. In this brain area, he argues, neurons have receptive fields that are tuned, or are tunable, to such patterns.

It is remarkable, says Dehaene that that we can recognize objects from mere line-drawings. Such drawings are least 30,000 years old, for instance in cave paintings such as the ox-like animal from Lascaux at the head of this post. Dehaene has studied ancient Middle Eastern and Western writing systems from cuneiform and hieroglyphic onwards, as well as Oriental writing systems like Chinese. Writing systems started with pictograms, which in turn derived from line-drawings.

The development of writing systems was a process of stylization and standardization, also a process of assimilation to what the receptive fields of visual neurons could easily respond to. In the earliest discovered Semitic writing (Proto-Sinaitic, from about 1700 BCE), the pictogram for an ox became a circle with two curved lines coming out of its top (for horns). It is a stylized version of something not very different from the Lascaux ox-head. In Phoenician, a writing system that descended from Proto-Sinaitic, a further stylization occurred: the curved lines became straight, and the character was rotated through 90 degrees, so that it looks like an A lying on its side. Written Greek derived from Phoenician, and in it a further 90 degree rotation occurred to produce A, alpha, and the same shape carried into the letter A in Latin which, of course, is still with us in English. Alpha derives from aleph, which in early Semitic languages means "ox." Dehaene goes on to show that most characters, in most writing systems, are made from one to three strokes. So, in the lower case Latin alphabet, c is one stroke, f is two strokes, k is three strokes (as is capital A). It isn't that the brain had to adapt to reading, but that writing systems had to adapt to a pre-existing functionality of the brain.

For readers of all languages, Dehaene claims, a specific area of the brain, the left occipito-temporal region, is the basis for the recognition of written characters. He calls it the letter box. This region has been identified in neuro-imaging studies by Dehaene and his colleagues, and it is used by Chinese people when they read Chinese, as well as by Westerners as they read European scripts. From this region, connections are made principally to two systems, one of which is concerned with the meanings of words and the other with their sounds. As a child learns to read, a network with an input from the letterbox region is formed. When the letterbox region is damaged, for instance by a stroke, a skilled reader can suffer the syndrome of being suddenly unable to read, though still able to write. The well-known Canadian writer of detective fiction, Howard Engel suffered such a stroke and I wrote a post about him (to see it you may click here).

At the end of his book, Dehaene goes on to describe how other features of the brain may have been the bases for other cultural inventions. He says that: "Mathematics, art, and religion may also be construed as constrained devices, adjusted to our primate brains by millennia of cultural evolution." He goes on to propose that a "conscious neuronal workspace" has arisen, and this "vast system of cortical connections, allows for the flexible arrangement of mental objects for novel purposes" (p. 301). According to this proposal, this network is not only the basis of conscious thought, but of the explorations of art.

Stanislas Dehaene (2009). Reading in the brain: The science and evolution of a human invention. New York: Viking.
Posted by Keith Oatley at 07:43
Labels: +Reviews, Art