Research Bulletin: Metaphoricity in the Brain 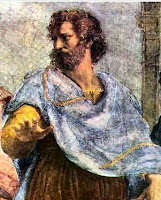 Continuing our recent discussions on the nature of metaphor, Rebecca pointed out in a comment on a recent post (click here) the work of Rachel Giora (2007) who has edited a special issue of Brain and Language, and written an editorial for it.

Giora starts her editorial with Aristotle:


In Poetics, Aristotle (350 BCE) contends that metaphor is ‘‘the mark of genius.’’ It differs from ‘‘the normal idiom’’ in that it is sophisticated and riddle-like. As such, it elevates style ‘‘above the commonplace and mean, while the use of proper words will make it perspicuous’’ (section 3, parts xxi, xxii).

Giora then goes on to describe what she calls the standard semantic view of metaphor which is that first a literal interpretation is considered and then, if this interpretation is inappropriate to the context, a figurative alternative is considered. Metaphor thereby becomes subject to a special type of alternative processing. Giora explains that this special processing has neurological implications, because literal meanings are thought to be processed quickly in the language regions of the left hemisphere, whereas metaphorical meanings are delayed and involve the right hemisphere.

The neurological work I discussed in my earlier post (click here), threw doubt on Lakoff and Johnson's (1980) idea that all metaphor is cross-domain mapping, a primary mode of thought. Giora does not discuss Lakoff and Johnson in this article, but their theory can be classed as an extension of the standard semantic view, because for them, too, metaphor involves a special kind of mental operation.

In her editorial, Giora reviews neuropsycholgoical research on left- versus right-hemisphere processing of literal and metaphorical sentences. She concludes that the view that metaphor requires special processing, which involves the right hemisphere, is not supported by recent evidence. Instead, an explanatory concept that better explains the results concerns the unusualness of phrases or sentences, which can apply to literal as well as metaphorical expressions. To put this another way, metaphor might be best understood not as a special process (of adopting the figurative when the literal won't work, or of cross-domain mapping), but in terms of the Russian Formalists' idea of defamiliarization, of making strange, which was anticpated by Aristotle, whom Giora cites on this topic as follows:


In Rhetoric, Aristotle (350BCE) suggests that such ‘‘variation from what is usual makes the language appear more stately. . . It is therefore well to give to everyday speech an unfamiliar air’’ (Book 3, part 2).

What Giora calls her "take-home message" is this:


Reviewing the results on metaphor processing presented in this special issue, it seems safe to conclude that metaphor per se is not unique. The brain is not sensitive to metaphoricity or literalness as such. Instead, it is sensitive to degrees of meaning salience, remoteness of semantic relationships, open-endedness, transparency of stimuli’s meanings, and speakers’ intention (regardless of contextual appropriateness).