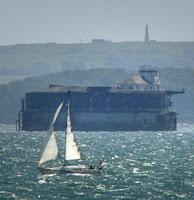 This coming weekend, if the English weather smiles on us, I plan to go sailing with my son in his 26-foot Westerly in the Solent, the area of water on the South Coast between the mainland and the Isle of Wight. Geologically, the whole region is sunken, as if the southern edge of England has been stepped on by a giant and pressed beneath the waters of the English Channel. Streams have become tidal rivers, estuaries have become lakes of open water, and rivers have become great waterways, one of which is the Solent. Amid such features of the natural landscape are elements of the man-made (sic) environment, some of which I describe in this brief excerpt from a novel in progress, set in 1946. The protagonist George is sailing with another character Bernardette in her 26-foot Folkboat. In this segment, they are in the eastern Solent approaches heading south, and leaving Chichester Harbour Entrance about a mile astern (the image is No Mans Land Fort, with the Isle of Wight in the background, and a boat sailing in the opposite direction to the one in the excerpt; click here for source.)


“All through history, there have been the most tremendous disasters, muddles, wars, mistakes," said Bernardette. "The Nab Tower, for instance, way out there.”

She pointed forward to where, perhaps five miles out to sea, a substantial object could be seen against the horizon.

"If you sail out there, you see it's like an immense gasometer. It was built, one of eight, to be planted on the sea bed across the Straits of Dover in the First War. They were going to string steel nets between them to stop the Germans whizzing up and down the Channel in their submarines. Completely barmy idea. At the end of the War, in 1918, they’d only completed one. They didn’t know what to do with it, so they put it out there.”

“What are you saying?”

“History. The history of mistakes and muddle.”

“Over there,” said Bernardette. “See those?”

She pointed off the starboard bow.

“See there’s a fort there, that's No Man's Land. A mile or so from the land, at the edge of the main shipping channel. And another one there. See them? There they are on the chart.”

Bernardette pointed to them on the chart.

“Take the tiller again. Keep on this heading, make sure you don’t gybe by mistake. When we get out a bit more the tide will be stronger, and we’ll alter course to starboard, and run down between the forts. Military mistakes—those forts—a bit like the Nab Tower, but from fifty years earlier, when the English thought the French might invade.”

“Much bigger, they're huge, 200 feet in diameter. You’ll see when we’re closer."

"What were they for?"

"The idea was to guard the entrance to Portsmouth, headquarters of the King's Navee. Gun platforms, incredibly expensive, but obsolete before they were finished in 1880, because whereas gunners on them wouldn’t know where French warships were, gunners on ships at that time with quite good position-finding and range-finding, would know exactly where the forts were.”

“What about this last War?”

“Never fired a belligerent shot since they were built. In this last war, they weren’t strong enough to mount anti-aircraft guns on.”