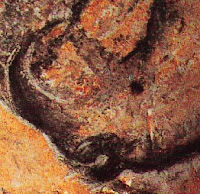 Although art exists in all societies, it seems only to have arrived among humankind rather recently. Steven Mithen (1996, 2001) proposed that the first objects in the archaeological record that unequivocally indicate the workings of art appeared between 50,000 and 30,000 years ago. Thus a wooden flute has been discovered from 43,000 years ago, and the earliest cave paintings, at Chauvet in France, are from 31,000 years ago. In this same period, ornaments such as bracelets appeared, as did sites of human burial. In all these cases the thing produced was both itself and something else. A piece of wood was also a flute capable of sounding notes. Charcoal on a cave wall was also a rhinoceros. A piece of bronze was also an adornment. A burial site was something constructed to show that someone was dead and also alive on some other plane.

Mithen’s hypothesis is that, until this period in prehistory, our ancestors were knowledgeable but their knowledge was confined within domains. One domain was of understandings of interactions in the social group, another was the properties of plant foods, and so on. At a certain point in the evolution of the human brain, the domains of our cognitive structures started to interpenetrate. Metaphor was born: marks on the wall of a cave could become a rhinoceros.

The mental process of metaphor later allowed the ancient Greek lyric poet Sappho to write: “Love shakes me again, that bitter-sweet creature.” Love is itself, and also something else. A piece of social understanding with a physiological aspect is interpenetrated by the experience of food, in a phrase that was so striking that the idea of love being bitter-sweet has lasted 2600 years. Such crossings of domain boundaries can have an arresting quality, so that we recognize them as special, as larger than ourselves.

Among the many important implications of this idea are that metaphor is not just ornament, not even just a linguistic phenomenon, it is fundamental to the way we think. It supports our abilities to make models of our world, in language, film, and other media. It also enables some permanence for externalized mental products. Though thought is ephemeral, art lasts and can spread to others. So although one can imagine a lover whispering an improvised poem into her lover’s ear, usually a poem lasts beyond the moment of its conception, and can travel. Also, art is not just frippery. As Maja Djikic has pointed out, the effort required for people 31,000 years ago to journey deep into caves, to make torches that enabled them to see, to manufacture pigments, indicated that they felt what they were doing was important.

The most recent issue of the magazine, Greater Good, is entitled "Why make art?" (To see and read this issue, click here.) I have an article in this issue which, as well as including a discussion of Mithen's work, has a summary of the recent results of our research group (Maja Djikic, Raymond Mar, Keith Oatley). My article is also in our archive or magazine articles, to access which you may click here.

Steven Mithen (1996). The prehistory of the mind: The cognitive origins of art and science. London: Thames and Hudson.

Just discovered your site, and I look forward to more quality time with it. My related work has to do with the ontology of map-making (I'm a cartographer), one of the topics on my blog, maphead.bogspot.com.

On art, I urge you to look at Larry Shiner's /The Invetion of Art/ as a clarifier to what exactly you mean by art; he specifically looks at how the idea of "fine arts" emerged in the latter half of the 18th century and early 19th century. The baggage that word has makes it hard to talk about with clarity.

Thank you very much for this comment, Natcase. Glad you like our site. Valentine Cadieux, who is on our team is by training a geographer. And I will certainly visit your site; I am very interested in maps. Also I am very happy to have the reference to Larry Shiner, whom I did not know.