The Watchmen: Comics' Use of Dissonance 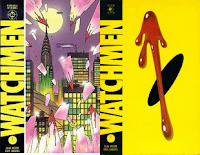 Having just read the Alan Moore and Dave Gibbons series The Watchmen in anticipation of this Friday's release of the comic-book-based film, this week I will reflect in a few installments on some of the creative possibilities of the comic book format in the context of the psychology of fiction.

In my post last Wednesday, I discussed the way that making up fictional stories may help us reconcile pieces of our world views that don't quite work together; small fictions may provide the fabric that piece together constructions or understandings that don't quite mesh. As these kinds of intermediaries, these kinds of fictions may well tell us a lot about our world views – displaying the very shape and form of the unknown we recognize well enough to need to contain. But these "necessary fictions" of everyday life are very difficult to examine (particularly for scientists), because by their very nature, they guard daunting areas of our cosmologies that we are likely to be loathe to unpack.

Fiction provides a venue for juxtaposing irreconcilable stories without all of the consequences of real life. The rigors of coherence and correspondence demand a certain restraint in creating such juxtapositions, but a central stock in trade of fictional construction is the paradoxes or contradiction that the protagonist encounters and must engage. Such dissonances provide excellent points of entry for some of the classics of the comics genre, and these dissonances also provide a subject matter that comics are pecularliarly well-suited to explore. The Watchmen takes as its starting premise the dissonance between the standard comics trope of "costumed heroes" and the perspective of comics readers. If those costumed heroes are to be judged from the perspectives of readers’ everyday lives, their long-underwear drama is obviously fanciful and somewhat ridiculous. Using as a starting premise this dissonance between a time when heroes made sense and a time when they seem weird, the cast of characters in The Watchmen are introduced mainly through the form of reminisce from retirement about the personal, social, and political changes that have contributed to this dissonance. Where once it seemed to makes sense for them to fight crime as heroes, does it now? Did it ever?

Moore and Gibbons skillfully meld the frames of the ostensible reader and the comic, calling into question the usual obvious distance placed between the reader's reality and the fiction of the comic -- while obviously also maintaining the frame of the comic's costumed hero genre. As Bill Benzon notes in his review on this site of Scott McCloud's 1993 Understanding Comics, comic books provide a particularly good insight into cognitive mechanisms of storytelling. In his recently posted 2005 TED (Technology Education Design) lecture, McCloud notes a contrast embodied in the experience of powerful stories: between stories as a venue to which to escape and stories as a window back into world we live.

McCloud asserts that comics provide a valuable frame for creating stories that enable different ways of re-entering the world in which we live, not just escaping it, and Moore and Gibbons’ juxtaposition of 1980s politics and superhero politics certainly delivers incisive commentary. As the political ramifications of the 1980s manifest in the current economy (a theme also picked up in Moore’s V for Vendetta), a curious theme of doubt cuts through the plentiful advance speculation about the film: do people want to see a dark murder mystery in depressed times? They did pretty well in the last Depression. It will be fascinating to see what kind of discourses emerge around The Watchmen, and they tell us about the shape and form of the unknowns we now face and recognize well enough to need to contain.