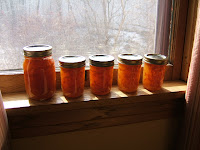 I’m not writing this as if I was there; I am standing in my kitchen, making orange marmalade. It’s the last week of my first winter in Minnesota, and the man who has been standing in the kitchen with me, telling me about being a real Minnesotan, has finally just left. As with the others who’ve welcomed me with similar challenges, he talks so openly about the differences between us that he’s hard to take seriously. Tomorrow is St. Patrick’s day, when real Minnesotans turn off their heat for the winter. It is also likely to be the end of the season for Seville oranges, which I have never tried, but which my British cookbook says I should stockpile for the warm months ahead. As the rivers of melt water sparkle down the yard past the kitchen window in the sun, I’m enjoying the idea of keeping some of winter frozen across the short span till next winter.
I don’t know whether Minnesotans entertain in the kitchen, in the way my mother did, and Colin’s, by the big woodstove – but not their mothers, who used their proper parlors. My kitchen leaves enough space around the blocky Minnesotan that I can chop the oranges, weigh the sugar, and lay out the jars without him feeling in the way, enough, apparently, to feel he should go. Minnesota has more heating degree days than anywhere else in the country, he tells me in several ways (colder than Alaska where his father lives, colder than anyplace but Winnipeg.) He mentions Winnipeg a number of times, sizing it up as a measure of unimaginable heating bills.
Stationed in the corner between the stove and the sink, while he talks, and then still here, still stirring, as I write, I feel my front warm from the marmalade pot at the same time my back is cold from the draught at the window. (This is why the Minnesotan representative from the energy company is in my kitchen.) I would be warmer if I were sitting over by the breakfast table, where the sun slants in one window, washes over the mail on the table, and goes out the glass doors onto the screen porch, but I would also risk him sitting at the other chair; he has already been glancing at the bottle of scotch sitting on the high wooden worktable between us, waiting to be poured over the marmalade when it’s scooped into the jars on the white enamel table pushed up against it. (To empty jars to house this new season jam, I had to finish blueberry jam – a gift from a trip to Maine – and prickly pear jelly – a gift from a houseguest from Colorado.)
The Minnesotan came with a camera that can see into the walls, but in its small and fancy display face, I cannot read any more of the story of how this kitchen has come to be than I have already told myself. I’ve assembled the piecemeal story of this practical kitchen from the feel of hitches in the drawers pulling, from the difference between the warm and cold cupboards, some with glass faces that let me be satisfied by the view of rows of jars, and the others probably as old as the quarter of the kitchen that pushes out beyond where the wall used to say was big enough for a midwestern kitchen. This used to be called the Flour City, and where my chipped white enamel table stands now on its crooked legs, I imagine an old Hoosier cabinet, dispensing drygoods in modern style before we needed spacious kitchens to tell guests that we know how to cook and they had better stay on their side of the table.
Posted by Kirsten Valentine Cadieux at 08:00
Labels: +Original Writing, Metonym, Original Writing