Babar in Words and Pictures 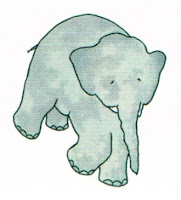 The posts made by Valentine on comics, on the 4th, 6th, and 9th of March (click here for the start of the series), remind us that the idea of fiction presented solely in the medium of print is rather modern. The earliest stories were oral: words in the medium of sound. The writings of the Egyptians were words and pictures. Then there were plays: words and actors. In medieval times came the comic-strip format of the Bayeux Tapestry's words and pictures. Towards the end of the Renaissance came opera: words, actors, music. Later came the movies. Fiction in print might be regarded as setting a distinctive task for the reader to make almost-sounds by speaking under his or her breath, and imagine scenes that are not represented visually.

It is therefore, perhaps, not accidental that in children's stories pictures share the page with the words: Jemima Puddle-Duck, Winnie the Pooh, Good-night Moon as well, of course, as Babar.

Babar was the subject, in the fall of 2008, of an exhibition at the Morgan Library in New York, accompanied by a beautiful catalogue by Christine Nelson (2008) that includes an introductory essay by Adam Gopnik (also published in the New Yorker, September 22, 2008; you can read this essay by clicking here). In the beginning, Babar, who had not then been given his famous name, was the subject of bed-time stories, words spoken-out-loud, told by Cécile de Brunhoff to her sons, Laurent and Mathieu. Then her husband Jean, an accomplished painter, started to create illustrations, influenced by Matisse and the Fauves. By clicking here you can see the whole set of page layouts, digital images of the 20.5 x 15.5 cm sheets of paper that Jean de Brunhoff had arranged into a booklet (called a maquette, meaning rough draft or scale model) for the first Babar story. You can also see the pages of the published version of the story, Histoire de Babar (1931). Each page layout in the maquette is of pencil drawings with occasional touches of water colour, and on each page there are one or two sentences written in a round cursive script. By the time Jean de Brunhoff died of tuberculosis in 1937, he had published seven Babar books. After the War, Laurent de Brunhoff took on the series, with a scarcely noticeable break in style. The de Brunhoff family donated the drafts and sketches of father and son to the Morgan Library. In the draft layouts for the first story we see externalization of thought onto paper, thoughtful reorganization, and progression to a final form. And whereas Jean started with pencil sketches in his layouts, Laurent—perhaps because le petit éléphant was by then a fully formed Babar-of-the-mind—started immediately with colour paintings of the characters.

The beginning of Histoire de Babar is that Babar's mother is shot by a hunter. When Jean took up the project of producing a book, Christine Nelson's exhibition, and the images at the website mentioed above, show him experimenting with the balance between words and pictures. For instance, on the seventh page spread of the maquette, after Babar's mother has been killed on the previous page spread, the words (in English translation) are: "Very sad indeed, Babar runs far away from the forest and from the hunter. After several days he comes to a town." In the published version, the text has become "Babar runs away because he is afraid of the hunter. After several days, very tired indeed he comes to a town." In the published version of the page that depicts this scene are three images of Babar. At the top left corner of the page there is an image of him running. Just above the middle the page, there is an image of him wandering. The bottom half of the page has some flowers, the words, and to the right of them the picture of Babar shown at the head of this post. It's a picture of a little elephant drooping, with sad eyes. The idea of sadness has shifted from a word in the earlier draft to a picture in the published form. Jean de Brunhoff thought it better to express sadness visually. One can think of a parent and child in the closeness of their attachment relationship studying this picture as they read the story together. At this point they feel for Babar. They might also feel relieved that their attachment is intact, or perhaps feel how unbearable it would be to have it severed.

That's an interesting detail to pick up on between the drafts, Keith. What made you select this one specifically?

Better yet, why Babar?

Thank you, Allan, for this comment. The answer to "why Babar?" is that I read Adam Gopnik's lovely article on Babar in the New Yorker, and so when I was in New York, I went to the Morgan Library to see the exhibition. There, I was delighted to find that Christine Nelson had arranged her exhibition partly around how the artist progressed from sketches to the final published version; this is a matter in which I am deeply interested, see my post of 16 February on Flaubert's methods for writing prose. Nelson also discussed Jean de Brunhoff's depictions of emotion in the elephants (emotion is another of my pursuits). Among several examples, for instance of the elephants being happy and being angry, she drew attention to Jean de Brunhoff's picture of Babar's sadness that I show at the head of the post, so it was she who made me notice this detail. You can see the changes of words and pictures from one draft to the other in the excellent website that I mention in the post, with images of the maquette and the published pages, and with the text in French and in English translation ... And then there were Valentine's posts on the relation between words and pictures in comics. Voila.