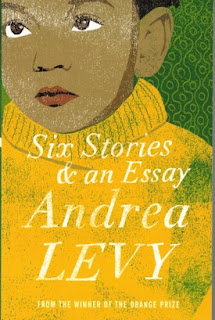 As with sonnets, some short stories have turning points. Andrea Levy’s “Deborah” has three. This story begins with a depiction of childhood play as good or better, on this, than anything I have read. Deborah is a friend of the narrator, Fern, whose mum, we infer, is an immigrant from Jamaica. Both girls are nine years old. They live a little way from each other on the ground floor of a block of council flats in Highbury, just north of Islington, in London. Deborah is one of a large family of twelve or so. She “has pale blue eyes” and “pink cheeks.” She sleeps with siblings in a room that has lots of beds. She is naughty, but also endearing, can always get a ball back when it is lost, hops over fences, can jump down ten stairs at a time. She loves to play with Fern. (What follow here are spoilers; if you don’t like these, please don’t read on.)

Kenny, a much younger boy, lives on the third floor of the flats; “he was ginger and cried if you called him carrot.” He follows Deborah and Fern when he can. They sometimes let him come along, because—being scruffy and unattractive—he doesn’t have anyone else to play with. The three of them go into the flat where Deborah lives, into the room with lots of beds. It’s untidy: “Shoes, knickers and socks where pillows should be.” Instead of a light bulb, in the middle of the ceiling there’s a bundle of electric wires and flex, with leads going everywhere. The three kids play a game of showing each other their bums. Kenny is totally overexcited. He jumps up and down on a bed, waving his arms. By mistake, he knocks down the bundle of flex, and bits of the ceiling fall down, too.
“Kenny, look what you’ve done,” shouts Fern.
“I never did anything … I never touched nothing,” says Kenny.

Then comes the first turning point. Deborah burrows under a bed, on the floor, against the wall, sucks her thumb like a baby. Fern asks her to come out, but she won’t. Kenny calls her “scaredy cat” and “cry baby.” Fern then leaves “the room with the plaster and the dust and the black electric leads like spiders’ legs.”

At a second turning point, later that day, Fern sees Kenny naked. “His mouth … open as if screaming but with no sound coming out.” He has gashes and cuts all over his body, some of them oozing blood. Then she sees Deborah, walking after him, grinning, carrying a piece of flex with spikey metal ends.

Deborah is then no longer to be seen. Adults appear. They want to know where she’s gone. Deborah’s dad shouts, “when I get hold of her I’ll kill her.”

The police are called. Kenny is taken off in an ambulance.

In the story’s last paragraph comes the third turning point. It’s how Fern finds Deborah in a secret hiding place the two of them have, with her cardigan “pulled up over her head … in front of her face. She was sucking her thumb and rocking gently backwards and forwards. And coming out from between her legs was a small trickle of piss.”

Although in the early part of the story it’s clear that Deborah does things she shouldn’t, we find that she has also learned what it is to be a bully. Beaten up perhaps by her father, or mother, perhaps by others, she beats up Kenny.

Another story in this collection is “That Polite Way that English People Have,” about a woman who emigrates to England from Jamaica. She has saved up to travel first class on a ship. She isn’t (quite) picked up by a posh-looking Englishman. He asks her if she would like a night cap. She says she doesn’t sleep with anything on her head. But Petal, another Jamaican woman, allows herself to be picked up. Now a turning point: in the boat’s first-class dining room, the posh man takes his meals with Petal, offers her cigarettes from a silver case. She whispers in his ear, and giggles. The narrator saw “the other English people looking at her [Petal] from the corner of their eyes. They were not used to someone as low class as she sitting right next to them … like she was as good as them.”

A sense of humanity emanates from the essay and stories in this book by Andrea Levy who died about a year ago. In her stories, I think, she is wondering how we humans often seem unable sometimes to get on with each other. In the story “Deborah,” the turning points enable us to enter the mind of a child who has been abused. In other stories, turning points are based on shocks about how people do things, say things, or fail to say things, which indicate that they think it inappropriate for another person to receive the kind of consideration they would like for themselves. Most frequently this is based on social class or culture. But does that make it any better?