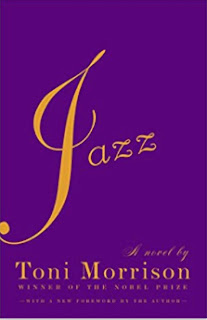 The 1992 novel, Jazz, by Toni Morrison, is original and engaging. In Mrs Dalloway, published in 1925, Virginia Woolf accomplished a novel of inwardness. In Jazz, Toni Morrison accomplished a further step: a novel of relationship. She did this by basing her book on a form of music—jazz—in which a theme is introduced and then, as in some pieces of classical music for instance by Bach, variations are offered. In this novel, the variations suggest ways in which different people experience a certain event (which one may think of as a theme) and, with this, their relationships change.

Jazz is a kind of love story, a mode that’s virtually a human universal. But this one is different, because it is not just a love story but a story of other kinds of relating as well. Following this novel, books in which relationship has come to the centre seem to be more frequent. So, for instance, in 2007, Katy Roiphe published Uncommon Arrangements, a biography not of a person but of relationships in marriage. Then came the novels of Elena Ferrante. The first, My Brilliant Friend, published in English in 2012, is not really about the friend as such, but about the narrator’s relationship with the friend when they were young. Then, in subsequent novels, Ferrante has written about how the relationship developed into adulthood.

Morrison states the theme of her novel at the book’s beginning. The fifty-year-old Joe is in love with an eighteen-year-old, Dorcas. At a party, he shoots her. As Morrison writes in the fourth and fifth line of the novel, he did this “just to keep the feeling going.”  No-one sees the shooting, and Joe is not arrested. He is married to Violet, but they’re not much in touch with each other. At Dorcas’s funeral, Violet stabs the dead girl with a knife, and wonders how she might take on some of the characteristics of Dorcas, so that Joe will love her.

Morrison’s suggestion in her novel is that being black in America gives one not just the legacy of slavery, but continuing oppression, so that achievement becomes difficult, and for many people almost impossible. But the human spirit is not suppressed. In the kind of society that has resulted, the focus has come to be on relationship. Jazz is a form of music that arose in this society, a form based on the relationships among the players, that depicts sadness (as in the blues), suffering, sometimes violence but, at the same time, progress.

By starting with a theme, and progressing through a sequence of chord structures, the musical form of jazz is based on improvisation in which the players of different instruments, and sometimes a singer, improvise in relation to each other. This is the kind of structure that Morrison uses in her novel.

The events with which the novel starts occur at the beginning of 1926. As the narrator says, after World War I: “Armistice was seven years old when Violet disrupted the funeral” (p. 9). Both Violet and Joe had been married for many years and had come from the rural South, to live in Harlem which, in the novel, is called “The City.” They had been getting along with each other, in a way, but not so well. They had no children together and this too, becomes a theme. Both realize that they did not really choose each other. Thinking back to when they met Violet says: “from the very beginning I was a substitute. And so was he” (p. 97). It’s many years later that Joe does make a choice: he come to love Dorcas. On page 135 he says, as if he were speaking to her: “I chose you. Nobody gave you to me. Nobody said that’s the one for you. I picked you out … I didn’t fall in love. I rose in it.”

Part of the performance of jazz music involves solos by players of particular instruments. In the book this is mirrored by stories told by Violet and Joe about their early lives in the South. Later in the book other characters enter as well. They include Malvonne Edwards, from whom Joe rents a room for a few hours a week, in the building in which he lives, so that he and Dorcas can meet there to have sex. Then there is Alice Manfred, who took Dorcas on when her mother (Alice’s sister) was killed in the anti-black race riots of St Louis in 1917, in which many people died.

There’s some wonderfully lyrical writing in this novel. Here’s an example.
A colored man floats down out of the sky blowing a saxophone, and below him, in the space between two buildings, a girl talks earnestly to a man in a straw hat. He touches her lip to remove a bit of something there. Suddenly she is quiet. He tilts her chin up. They stand there. Her grip on her purse slackens and her neck makes a nice curve … Do what you please in the City. It is there to back and frame you no matter what you do… Hospitality is gold in this City. You have to be clever to figure out how to be welcoming and defensive at the same time. When to love something and when to quit (pp. 8-9).

After Dorcas’s death, Violet comes to know and relate to both Alice Manfred and Malvonne Edwards. Then, later as well, Dorcas’s best friend Felice enters the story, as does a young man called Acton, whom all the young women want to be with. Dorcas manages to catch him, and starts to have sex with him. Joe realizes this. And that is the reason—well, one of the reasons—he shoots Dorcas. What happens, then, in the relationship between Violet and Joe? To find out, you need to read the novel.

At the end of her book, Morrison adds the loveliest coda, in which the novel’s narrator speaks to the author. By means of what she says, in a Proustian way, she speaks to us, the readers, engaging us also in relationship with the novel’s characters and events, as well as with the narrator … and the author.

Toni Morrison (1992). Jazz. New York: Knopf. Page numbers are from the 2004 paperback edition, with a new Foreword by the author, published by Vintage International.