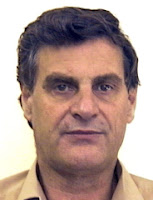 Imagine you are given this photograph, and asked to write a fictional character sketch of the man depicted here. This is the task that Marta Maslej, Raymond Mar, and I, gave to participants, in a study published last year. What would there be in your habits and traits that would influence what you write, and how you write it?

In our study we asked 207 participants each to write a fictional character sketch of the man in this photo. We asked them, too, about their habits of writing and reading, and gave them questions about traits of personality, empathy, and engagement in fantasy. Then, to a different group of people, 144 in number, we gave the character sketches that the first group of participants had produced and asked them to rate the sketches as to how likeable, interesting, and complex, each character was.

We found that habits of writing fiction, and of writing and reading poetry, were associated with producing character sketches that were rated as more interesting and complex. In terms of personality traits of Extraversion, Emotional Stability, Agreeableness, Openness, and Conscientiousness, only Openness was associated with sketches of characters who were interesting and complex. Higher levels of empathetic concern, and of engagement in fantasy, had similar effects. No habits or traits were associated with writing sketches of characters who were more likeable.

We found it surprising that reading more poetry had an effect on people’s abilities to create characters who were interesting and complex, although habits of reading more prose fiction and non-fiction did not. Perhaps reading poetry involves an interest in language and emotion, which are also helpful in verbal depiction of characters. Perhaps the lack of effect from reading more prose is similar to how listening to a lot of music does not necessarily contribute much to becoming a musician.

Some people are drawn to writing fiction. It seems that they are more likely to be among those who seek out challenges of intellectual and aesthetic kinds (the trait of Openness), as well as being higher in empathy for others, and more likely to engage in fantasy. We can imagine that it’s people with these habits and character traits who go on to become authors of novels and short stories that are published.