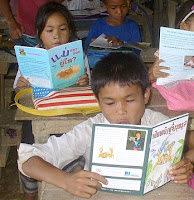 Engagement in fiction starts with stories being read to young children, and with parents and other adults interacting with children in relation to books that have pictures and text. By middle childhood, reading is taught at school, while at home it’s in competition with the watching of television and with being on the computer for various reasons. With four colleagues, Johanna Rosenqvist, who is at the University of Helsinki, analyzed data from 381 typically developing North American children, who were between the ages of five and twelve, who had taken part in a study of neurocognitive development (see the report by Korkman et al. 2013). Assessments were analyzed for each child in five domains: Attention and Executive Functioning, Language, Memory and Learning, Social Perception, and Visuospatial Processing. A parent of the child (or in 5.5% of cases another adult such as a grandparent) gave information on how many hours a day the child watched television, how many hours a week the child was on a computer, and how many hours a week the child spent reading at home.

The amount of television that children watched had a significant and negative relationship with children’s scores in all five domains of functioning that had been analyzed: the more hours of television watching, the worse was children's neurocognitive processing. In contrast, the amount of computer use was significantly and positively associated with scores in the domains of Language, Memory and Learning, and Social Perception. The amount of reading children did was significantly and positively associated with scores the domains of Attention and Executive Functioning and Visuospatial Processing. The researchers say that when maternal education was lower than average, reading was also positively related to Memory and Learning. Overall, maternal education, rather that the media with which children spent their time, was the strongest positive predictor of all neurocognitive variables.

The researchers suggest that limiting the amount of time that children spend watching television might be a good idea but this may not get to the root of the issue. It seems likely that mothers who are more educated have the effects they do by encouraging their children to read.

Why merely limit a child's exposure to television? If it is bad, it's bad even in small doses.

When they're young, don't have one in the house, except perhaps with a DVD player for movies. When they get older, have one but point out to them that a lot of what's on TV is trash, and that they need to carefully control what they do watch.