Obama and truth in fiction 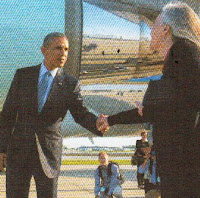 In The New York Review of Books recently a conversation was published between US President Barack Obama and novelist Marilynne Robinson. At the beginning of the second part of this conversation, published on 19 November 2015, p. 6, Obama is quoted as saying:

… the most important set of understandings that I bring to that position of citizen, the most important stuff I’ve learned I think I’ve learned from novels. It has to do with empathy. It has to do with being comfortable with the notion that the world is complicated and full of grays, but there’s still truth there to be found, and that you have to strive for that and work for that. And the notion that it’s possible to connect with some[one] else even though they’re very different from you.

The first is that fiction is an invitation to empathy with others. Were he not so busy, I imagine Obama would be delighted to read of recent findings in the psychology of fiction (see e.g. Mar & al. 2006; Kidd & Castano, 2013).

The second is the issue of truth. Certain people—for reasons of their own I suppose—think that fiction is merely made up, that it is lies. But Obama is right. Recent empirical findings have confirmed it: there is truth in fiction—truth of other people—otherwise the findings I quoted in the previous paragraph could not have occurred. Is there more to be said about this kind of truth? Obama says it’s about a “world [that] is complicated and full of grays.” No doubt that’s right, too, but can we go further? Truth in science involves correspondences between mental models of scientists and aspects of the physical and biological world. These worlds oblige by remaining more-or-less stable. But there are other kinds of truth, and for these we must turn to fiction (Oatley, 1999). Each person we know is her or his own world, and each of us is another such world. So among us humans not only are there many worlds to make models of, but these worlds don’t remain stable. They change as we develop, they change with circumstance, and they change with the relationships people enter. And where might we learn about such matters? By living, of course, but also as Barack Obama said, from novels.