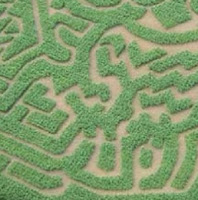 At the Morgan Library in New York, one of the exhibitions is of some of Jane Austen’s letters and some drafts of her fiction. Her letters are, for the most part, continuous. As in conversation, the words seem just to have flowed. By contrast, Austen’s drafts of fiction are full of crossings-out. Some people might think of this as trial-and-error, but a far better way of thinking about it is as exploration. When one reads a novel or short story, or watches a film, one wants to engage in something that had been explored, thought about, written, re-written, explored again, explored widely.

information input (where and how the scriptwriter gets information and inspiration), mental processes (reasoning, planning, thinking, daydreaming, problem solving, decision making), relationships with others, job context, and constraints (p. 385).

The authors of the paper propose a metaphor: writing is traversing a maze of creativity. It is as if writers make a journey in which they navigate several segments, going up blind alleys, doubling back, finding the best pathways. The authors propose three phases. First there is a long and enjoyable phase of what they call “impregnation,” which often involves making maps of the coming journey. This is followed by a phase that the authors call “structuring,” which for screenwriting involves writing an outline and/or treatment that a director, a producer, or a sponsor, must accept before a project can be financed to go forward. In the third phase there is intense writing and re-writing of the script.

Writing scripts and writing for print fiction are in many ways similar, but whereas those who write novels and short stories often work mostly alone and at a certain stage with an editor, scriptwriting is a journey with several others. The authors of this paper say: “The process of rewriting several versions of the script seems to be universal among screenplay writers, engaging often the producer of the film, actors, and so forth (p. 396). The moral standpoints, the views, the ideas, and the preferences, of these people need to be taken into account. Successful scriptwriting depends, in part, on being able to maintain good working relationships with all of them.

In addition, they [the scriptwriters] reported that as one “gets into the skin of the main character,” “understands the character,” and “makes him talk,” they often experience enjoyable moments in which intuition, unconscious, and automatic process take over the generation and selection of creative ideas (p. 397).

The authors offer many other fascinating quotes from the scriptwriters. Here’s one about the first phase:

when I find a good idea, or a scene that I like, I turn around it. Generally, I do a lot of things that are indirectly related to the work, I read a lot, I copy many texts that interest me, I see a lot of movies, I listen to a lot of music (p. 390).

Here is a quote from a scriptwriter about the second phase:

You can have all the talent and all the literary imagination—which are two essential components of the profession—if you don’t have the skills for this tedious task of structuring, you cannot go far. This is something that has more to do with math, a kind of mental structure or consistency: such cause produces such effect (p. 392).

And, here’s a quote from a scriptwriter about the final phase:

There is a constant fluctuation. There are only manic-depressive people in this profession! (laughs). It’s like climbing stairs toward an untouchable star, because in fact at each step we need to climb another one, and as the goal is to reach an untouchable star, we are always in this situation (p. 395).

One reason why Bourgeois-Bougrine and her colleagues’ metaphor of the maze is such a good one is that, although they don’t say this, for a really good story nearly the whole maze needs to have been explored. When this has happened, the watcher of the movie (or the reader of the book) will get the sense that the route taken in the story is a good one in comparison with all the less-good turnings that could have been taken.