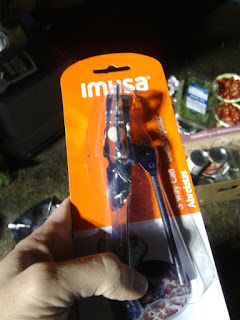 The past several weeks in Minneapolis have been tumultuous if hopeful. Protests have gathered since the November 15 police killing of Jamar Clark, and these have revealed both the volatile persistence of white supremacy (via the subsequent terrorism and shooting of peaceful protestors) and also, via sustained caring work of thousands of people to support the various needs of those involved, the steady persistence of communities determined to dismantle racism and its institutions.


As an identifiably white woman involved in food movement work (where white women form a corps of allies—although with a longstanding and often problematic and privileged history of unsuccessfully trying to make things better), I am cautious about the ways I seek to discharge my own feelings of frustration and dismay over the injustices being protested. I vocally appreciate the many efforts that have been made to push back against policies intentionally designed to exploit and injure—like redlining and other "black rules" that keeps people of color from homeownership and other loans that make middle class stability possible—and I am also vocal in revising the stories that blame the failures of extending middle class participation equitably on those from whom it has been withheld. Now in the midst of the North American holiday season, my brother has been jokingly sharing helpful how-to lists about avoiding politics and rancor at family meals, recognizing the number of times I have helped clear the end of the dinner table lingering by taking my male relatives up on their baiting rants about black fatherhood responsibility or unemployment patterns or the current complaint about political correctness. I find the conservative-talk-show-fueled handbook of explanations about social issues irresistibly compelling in part because it opens conversational doors my aunts and colleagues, for example, are more likely to ignore. And once opened, there are so many stories of dispossession resisted, of calories withheld and recreated anyways, of food knowledge suppressed but sewn in seeds into hems, and persisting to nourish people in their long, long fight to even be recognized as having food knowledge, as deserving land and love and repair, and as our relatives, our neighbors, people to whom we have responsibilities of basic human decency, even if we cannot understand the abstract ways we are implicated in their traumatic histories of enslavement and discrimination, and the ways finance and property and educational systems continue to benefit us at their expense.

So given eighteen days when this conversation is brought out into the streets, where white people walk tentatively down the sidewalk to say they are neighbors and want to be supportive but that they do not understand what is at stake and how we have gotten to this point of conflict, I found myself needing to be there, not because I felt like I could help so much as because I felt so overwhelmed with helplessness and disempowering rage otherwise. Being there, the Black Lives Matters leaders gave a focus to my emotion; I could find tasks needing doing, and orientation to keep on in the face of this offered while working alongside people who have to live with this rage and systemic disempowerment.

Maybe I was a little bit helpful for some of those white folks who were wanting to enter a conversation and needed someone with the time to talk them through some history, or for the various crews where I was able to help keep people fed or warm or sustained in some other way, including the nerdy crew of mostly outsiders who launched into the project of catching ourselves up on the history of the community centered around this police station (built symbolically on the site of a former community center). But more than anything, what I was able to do there was to learn viscerally how movements feed themselves, both practically and intangibly, using their overwhelming emotion as the fuel that sustains movement logistics, and practically giving many the chance to learn what’s happening and why and how, and how to be fundamentally human, through the chance to feed each other—to give and receive food, and in talking over its practicalities, to reproduce a community, find out what it needs, and find out how one is a part of it.

After asking hundreds of protesters dancing in the streets and listening to the speeches of American Indian Movement and Black Lives Matter speakers and singers after a march on City Hall whether they had a pocket tool that might open some of the many cans of food donated, I tied this can opener above to the kitchen tent during the first week of the protest. And I’m sure it was bulldozed at the end (somewhere around 36:00 here...); but after being sent on mission to find it in the nearby neighborhood grocery store (the one amidst the 37 fast food restaurants and one ascendant sit-down, youth-employing, amazing community-anchoring café and the similarly inspiring West Broadway Farmers Market), I kept the other one in my pocket because I know I’ll continue to need it.